McDonald’s Is Testing A New Spam Burger Topped With Oreos And Mayo, AKA The Perfect Sandwich For 2020! 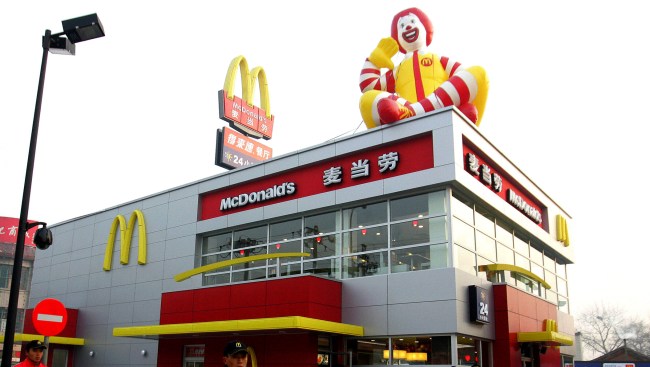 McDonald’s China announced last week on Weibo that it is releasing a new Oreo and Spam burger. That’s right. Spam topped with crushed Oreos, and mayonnaise! And it’s not even April Fools’ Day!

Meanwhile in America, the ice cream machines are still broken.

The limited time Spam and Oreo sandwich officially became available on December 21 in Chinese McDonald’s restaurants, and supposedly, the fast food behemoth will only be selling 400,000 of them. (What are the odds that someone just buys one and keeps it stored away for 20 years or so to see what happens?)

Here we were thinking that the KFC donut sandwich was the most digusting-sounding food released by a restaurant this year.

“I thought it was delicious,” said a commenter on Weibo, reports the AP. “Is that because I love McDonald’s too deeply? Or is something wrong with my taste?”

That person’s reaction to this culinary abomination, however, did not mirror most of the other reactions by folks on the internet.

McDonalds China is introducing a new Oreo x Spam burger on December 21. There will be 400,000 produced and sold.

(Look, I saw this so you have to see it too. Sorry, that's how it works). pic.twitter.com/QCiog64wAY

“Feels like someone went through a break up, and just went crazy on McDonalds and Oreos while watching Iqiyi,” commented Twitter user @GodBlessMali. “Next day at the office: How about McDoreo?”

I literally will try anything, hell I’ve had brains before but this?https://t.co/69r3aRAutl

What have I done to you in a previous life to deserve this?

McDonald's Is Releasing A New Burger And It's Made With Spam and Oreos https://t.co/3gmkcNp7or

and now Pizza Hut in China is providing Oreo Ice Cream pizza in Shangahi Metro City branch with Christmas themed restaurant, is this some kind of oreo campaign? pic.twitter.com/EtmYER5xo3

What… is going on in China?