A Study Found The Cure For Baldness Might Be The Same As My Cure For Hangovers: McDonald’s 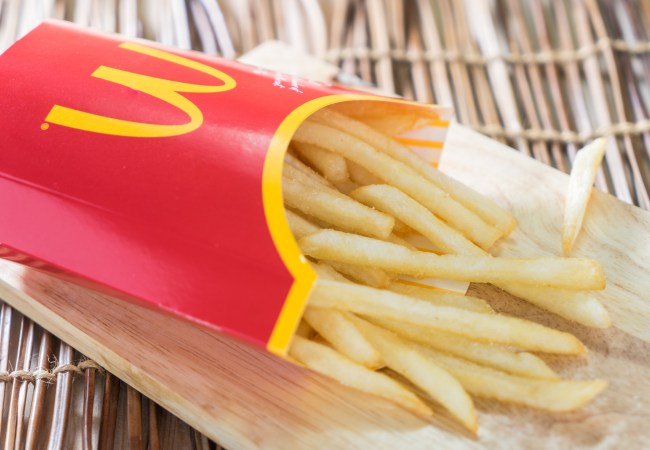 Some dudes know it’s coming based on genetics and early pattern baldness. You might be one of these guys or you might’ve had some friends like this. It always seemed to start at the crown of the head and would be accompanied by some excuse about how they wear too many hats.

The good news is, there might be a fix. Actually, it seems like there have been fixes for baldness since the dawn of time. I remember seeing ‘Hair Club For Men’ TV commercials from the time I started watching TV, but this is different.

Researchers from Yokohama National University ran a study and they believe the cure for baldness is actually the same as my personal cure for hangovers: McDonald’s French Fries. It turns out that one of the ingredients in McDonald’s fries could be crucial in the fight against baldness.

According to WLWT, a new study from Yokohama National University states a chemical used in the cooking of the giant food chain’s fries has been added to prevent the oil from frothing.

Researchers were able to regrow hair on mice by using dimethylpolysiloxane to mass produce “hair follicle germs”. Biomaterials reports the successful preparation of up to 5000 HFGs simultaneously led to new hair growth from the HFGs after transplantation into mice.
The study released last week claims the cooking oil addictive as a breakthrough in the experiment.

“The key for the mass production of HFGs was a choice of substrate materials for culture vessel,” says the corresponding author Junji Fukuda, Professor, Yokohama National University. “We used oxygen-permeable dimethylpolysiloxane (PDMS) at the bottom of culture vessel, and it worked very well.” (via)

Eating McDonald’s fries can cause new hair growth in balding individuals. This is the last news story I expected to come across in 2019.

They’ve apparently only run this test on mice so far but human trials will surely be next and what works on mice tends to work on humans. If you’re a balding man or getting older and worried about balding you might want to start bulking up on MacDeezy fries now. What’s the worst that could happen, a little ol’ weight gain? That’ll just force you to hit the gym harder and get healthier, right?