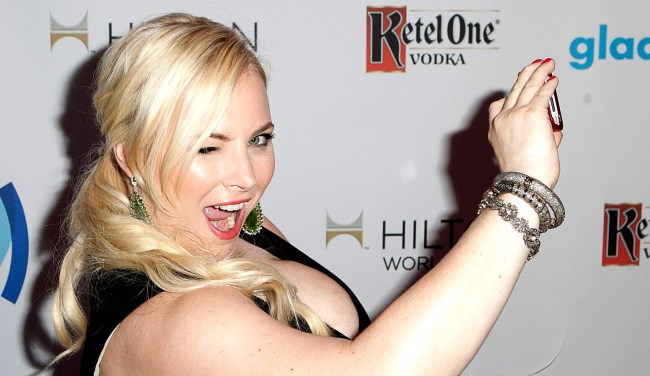 Thanks to being a co-host on The View, and being former presidential candidate John McCain’s daughter, Meghan McCain has over 747,000 people following her on Twitter.

One would think that based on those particular facts McCain would try to be somewhat responsible when it comes to tweeting out inflammatory statements. Especially, false statements.

On Tuesday, McCain tweeted, “My neighborhood in Manhattan is eviscerated and looks like a war zone. DeBlasio and Cuomo are an utter disgrace. This is not America. Our leaders have abandoned us and continue to let great American cities burn to the ground and be destroyed. I never could have fathomed this.”

Shortly thereafter, her neighbor Kristen Bartlett, the co-head writer on Full Frontal with Samantha Bee, tweeted back at McCain, “Meghan, we live in the same building, and I just walked outside. It’s fine.”

Another woman who lives in the same building, Alison Greene, even went outside and took some pictures

Meghan, I also live in the same building and went for a walk both yesterday and this morning and it's fine.

Btw, @MeghanMcCain I heard you left New York months ago, I thought you abandoned us….are you back?

I think she did. Folks in the bldg who would know say she hasn't been here for months. So I was surprised she had such a clear view of our 'eviscerated' neighborhood all the way from Arizona

Btw, I went for a walk right before curfew. I'm not sure Meghan knows what a war zone is pic.twitter.com/7awSrn06rm

Those are some pretty solid receipts that McCain was making statements that were flat out “fake news.”

On Wednesday, McCain was back on Twitter trying to defend herself by blaming the fact that she’s pregnant?

1. I am six months pregnant – a gossip organization is about to run a story of where me and my family are currently. I sent a tweet yesterday based on the news I saw happening in midtown we all have been watching all over different media platforms…

2. I support the peaceful protests, their movement but am absolutely heartbroken about the destruction in the city I have loved since I moved to when I was 18. It is important to have your voice heard and I hope everyone stays safe and healthy.

Yep. Somehow, McCain managed to dig the hole she made for herself even deeper, finding herself being compared to the “Central Park Karen” Amy Cooper.

Bearing false witness. Not very Christian of you. Also, get bent and go live in a red state.

What does any of that have to do with how many months pregnant you are ??

What does being six months pregnant have to do with anything???

Pardon, but you made a definitive statement about what you saw outside your home. If you don’t want to be fact checked, don’t make public statements that impact other people and are false.

According to Page Six, says they were told by a source, “She isn’t even in the city! She’s in Virginia at a family home because she wanted to be in a place she could keep guns.”

McCain’s personal representative said that her leaving New York so she could have guns handy “is absolutely untrue.”