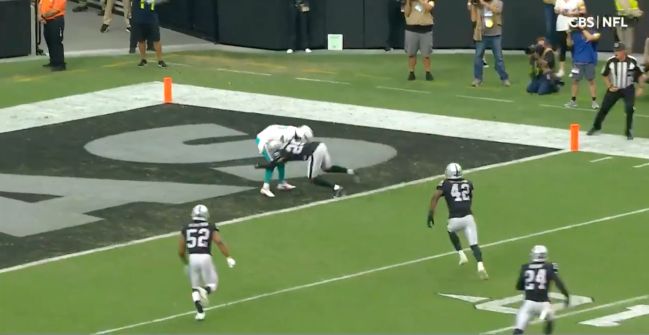 The Dolphins have not made public who exactly is calling the plays on offense. Perhaps that is for the best.

Veteran play-caller George Godsey is in the press box and co-offensive coordinator Eric Studesville is on the sideline. It seems like a good bet that Godsey is heavily involved and that Studesville and quarterbacks coach Charlie Frye are the middlemen.

“We’ve talked about this,” said head coach Brian Flores back in August. “We’ve got a system in place. We know how we’re handling that situation.”

However, whomever it is, they might not want to come forth after Sunday.

During Miami’s game against Las Vegas, the play-caller dialed up what could actually be the worst play call in NFL history.

Facing a 1st-and-10 from their own one-yard-line, quarterback Jacoby Brissett dropped back and threw a screen to the left side. Wide receiver Jaylen Waddle was all alone split out toward the sideline and caught the ball two yards deep into his own end zone.

The play — which makes absolutely no sense — fooled nobody. Raiders defensive back Casey Hayward (and everybody watching) saw the screen unfold and swarmed to make the tackle.

Casey Hayward read it perfectly for the safety 🙏 @show_case29 #RaiderNation

I really can’t even begin to fathom what the Dolphins thought would happen here. They were backed up against their own end zone and chose to throw the ball to a blocker-less receiver who is just standing in the end zone with nowhere to go.

Nobody was there to fend off Raiders defenders and there was no fake element to it. Brissett really just turned and threw the ball for a pretty clear-cut safety.