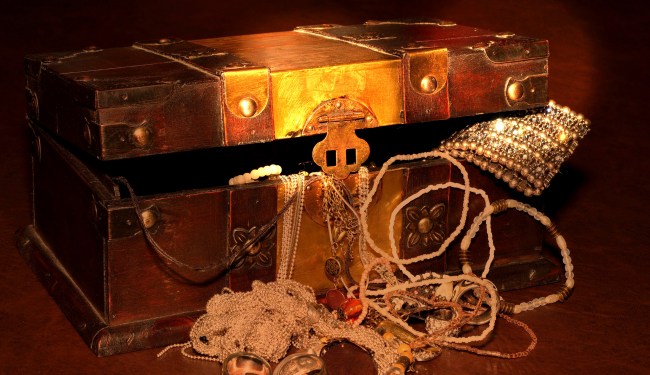 Johnny Perri, a jeweler in Macomb County, Michigan, is like many of us in America. He’s been struggling to stay open and make sales thanks to the ongoing (thanks, Florida) pandemic in the country.

So, in a fit of pure genius, Perri and his wife Amy decided that rather than just selling off the business he’s been in his entire life and was started by his father they would just empty their shelves at J&M Jewelers and bury the sparkly goodies all over the state for an epic treasure hunt.

“I said Amy, we can take everything out and retire or we can bury it across the state of Michigan,” recalls Perri.

She, and he, chose option number two.

“We went through waterfalls, streams, we kayaked everywhere,” said Perri. “As soon as I release the clues the race is on.”

He says he and his wife spent about four months burying “thousands upon thousands” of pieces of treasure throughout Michgan, choosing spots special to his life, reports FOX 13 News.

The clues will be released on JohnnysTreasureQuest.com, but it’s not free. You have to purchase a ticket to participate with the first going for $49. As the quest progresses, more tickets will be sold and the price will vary depending on the “treasure.”

“You follow the riddle, you got a little wit, a little adventure in you, you’ll find it quick – I don’t expect it to go more than a week,” said Perri about the first treasure quest which he says is two 100 ounce silver bars worth approximately $4,200.

“We have a GPS in there so I know if it’s moved,” he pointed out, adding that each treasure location has an “X” painted on the spot where it’s buried.

Sadly, Perri is still closing the store in Washington Township after 23 years. The pandemic has pretty much killed it. But now, showing some entrepreneurial spirit, he has a new, fun way to make a little money.

“I was going nuts at home with nothing to do pacing back and forth,” he said.

And don’t feel too bad for him, because as he wrote on the quest’s website, “Although I enjoyed being in business for myself and have been blessed serving our wonderful customers, I’ve discovered that I was never truly happy.”

Now he says, “Giving people adventure is giving them something to believe in again, besides this COVID crap.”