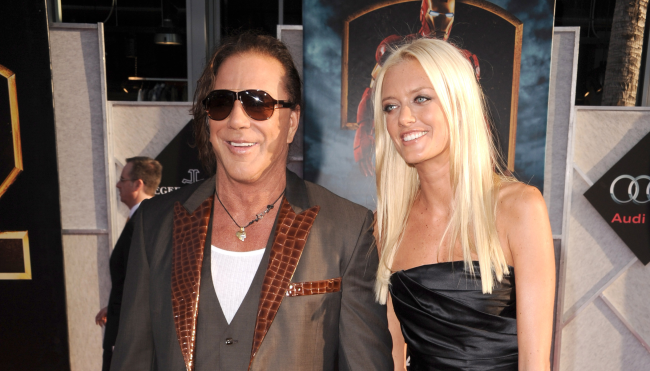 Every now and then actor Mickey Rourke reminds us of his existence by firing off a social media missile out of the blue at someone that, on the surface, seems rather random.

Today, for some reason, the 68-year-old curmudgeon is taking aim at acting in Marvel movies.

Rourke, who played Iron Man 2 villain Ivan Vanko (Whiplash) in 2010, apparently didn’t enjoy his time in the MCU as he sideswiped the acting in the film franchise as he was heaping praise on the actors who appear on Law & Order: Special Victims Unit.

[Note: I left all of the spelling, punctuation, spacing, and grammatical errors in his quotes because I am sure that’s how he would have wanted it. Keeping it real, and all that.]

“I heard this show is been on for 20 yrs,i never knew anything about it before until the lockdown since i have all my gym equipment in my living room,6 months ago while i’ve been doing all my training at home isolating i click on this show just by accident and curiosity and have to say i’ve never seen such terrific acting ever on television!” Rourke wrote on Instagram.

“Each show that i seen and I probably seen a 1000 of them by now the producing is terrific,the direction is top class and most of all i am really impressed with this ensembles of highly talented actors.

“Mariska Hargitay,is a very concentrated actress,she is absolutely great in every episode. Her dedication and very meticulous work put her on another level. There’s very few,if any actresses in films these days that can hold her jock strap. I give her tremendous respect for her amazing ability.

“On the other hand Christopher Meloni the man brings a lot to the table with his physicality,his short fuse knowing that he had a high level football background explaining it all,” he continues. “Those of us who played football growing up sometimes blessed to play for coaches that give us a lot of character that becomes part of our DNA that we carry through the rest of our life it’s an in a strength you can’t buy.

“I also took notice to the classy and highly talented intense Stephanie March as well as BD Wong,most surprised, tremendously impressed with the charisma,the attitude and swag and senserity that Ice T brings to his particular role.What’s especially enjoying is watching commodity of this exceptional group of actors…i guess if it wasn’t this lockdown most likely i’d never see this show,but since i do all my lifting training in my living room my tv been on whole lockdown and i was able to discover this fabulous show.

“Respect to all of you,the work that you all do is real acting,not like that crap that all on Marvel sh-t.”

Sounds like Mickey is still mad at Marvel for not allowing him to “bring some other layers and colors” to his character” because “Marvel just wanted a one-dimensional bad guy, so most of the performance ended up the floor.”

“Well, you know, it is f—ing too bad, but it’s their loss,” Rourke said in 2011, just one year after Iron Man 2 debuted. “If they want to make mindless comic book movies, then I don’t want to be a part of that. I don’t want to have to care so much and work so hard, and then fight them for intelligent reasoning, and just because they’re calling the shots they… You know, I didn’t work for three months on the accent and all the adjustments and go to Russia just so I could end up on the floor. Because that can make somebody say at the end of the day, oh f—‘em, I’m just going to mail it in. But I’m not that kind of guy. I’m never going to mail it in.”

Rourke then added, “At the end of the day you’ve got some nerd with a pocketful of money calling the shots.”

Yeah, but that pocket was really, REALLY full of money.