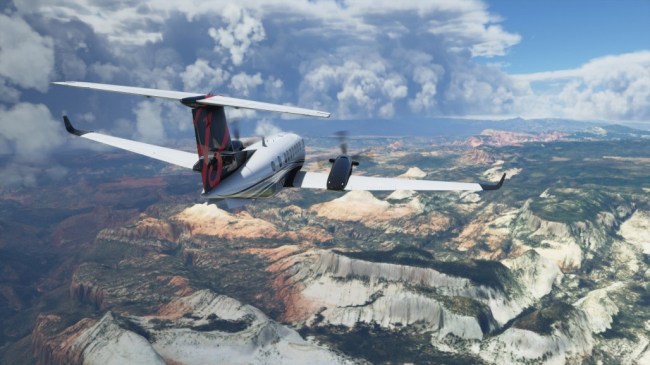 Microsoft Flight Simulator players are chasing after Hurricane Laura using the game’s live weather system and the resulting videos and images that are being produced are crazy.

Laura – a Cat 4 hurricane, which has been referred to as “unsurvivable” – is so strong that the Vermilion Parish Sheriff’s Office in Louisiana has asked those that are not going to evacuate to “write your name, address, social security number, and next of kin and put it a ziplock bag in your pocket.”

However, for Microsoft Flight Simulator players the storm is providing the rare opportunity to study a hurricane of such incredible magnitude from a safe and unique perspective.

Flight Simulator includes a live weather system, which is basically modeling Laura inside the game world. Microsoft partnered with Swiss meteorological service Meteoblue, dividing the in-game world up into 2 million 100-square-mile chunks, each with its own simulated weather system based on real-world data. The result is something quite remarkable.

That is putting it mildly.

Microsoft Flight Simulator pulls in lots of real-world data, which sometimes leads to hiccups and glitches as the game struggles to bring it all together as a cohesive whole. Weather data is an exception, however. The game isn’t putting individual in-game clouds where they are in the real sky, but instead running a sophisticated simulation based on the data. The result: incredibly stunning pictures of a virtual version of the same storm.

Just flew through the outer edge of Hurricane Laura in #MicrosoftFlightSimulator pic.twitter.com/XeyneNTVk4

That… is amazing. BRB, going to buy Microsoft Flight Simulator.

AFAIK all the green dots are other players.

I feel like MS Flight Sim is going to create a new genre of gaming events where people track down IRL weather events in-game to experience them.

It's so incredible that this stuff is possible. pic.twitter.com/ZBws2qFIbc