Mike Tyson Says He Once Tried To Fight A Silverback Gorilla At The Zoo For $10,000 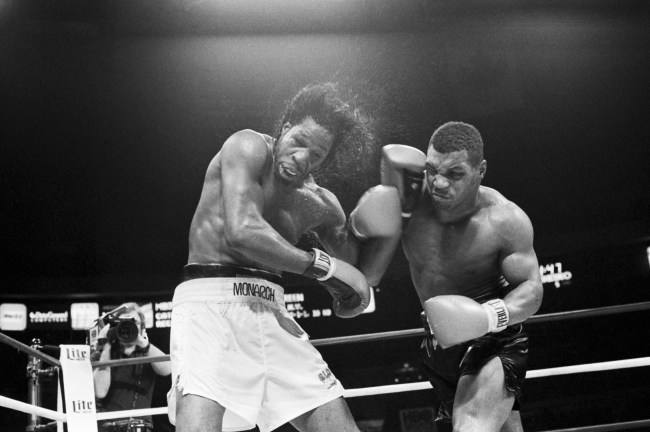 It’s hard to pinpoint the most outrageous Mike Tyson story in history but this one is definitely in the running. He apparently tried to pay a zookeeper $10,000 on the spot to let him get in the gorilla enclosure and fight a silverback gorilla.

With any normal human being, you’d assume that the person would be dead on the spot. The gorilla could easily rip their arms off and beat them with them if it wanted to. But this is ‘Iron’ Mike Tyson we’re talking about, and I’m not so sure he would’ve been killed by the gorilla. I could easily see his confidence being something that puts the gorilla on tilt.

This all went down when Mike Tyson was 20-years-old, way back in 1986. According to The Sun, Mike Tyson bribed a zookeeper to open the zoo for Mike and his wife after hours so they could have a private tour.

He suddenly got an idea as they approached ape enclosure as they spotted a dominant alpha male bullying the rest of the submissive group.
And he quickly attempted to offer the cash to the zookeeper to open the cage so he could go in there and punch the gorilla.

Tyson explained: “I paid a worker at New York’s zoo to re-open it just for me and Robin.

“When we got to the gorilla cage there was one big silverback gorilla there just bullying all the other gorillas.
“They were so powerful but their eyes were like an innocent infant.

“I offered the attendant $10,000 to open the cage and let smash that silverback’s snotbox! He declined.” (via)

Mike Tyson’s been in the news a lot lately. He recently smoked the largest damn joint I’ve ever seen. There was also this story about his wife finding condoms in his pocket which led to him giving away a $180,000 Rolls Royce, and he talked about how he came to own white tigers.

This is definitely one of those ‘what if’ stories because it never came to fruition and that’s probably for the best. There’s no telling what would’ve happened if Mike Tyson tried to approach an alpha gorilla but it was definitely for the good of Boxing that we never got our answer.