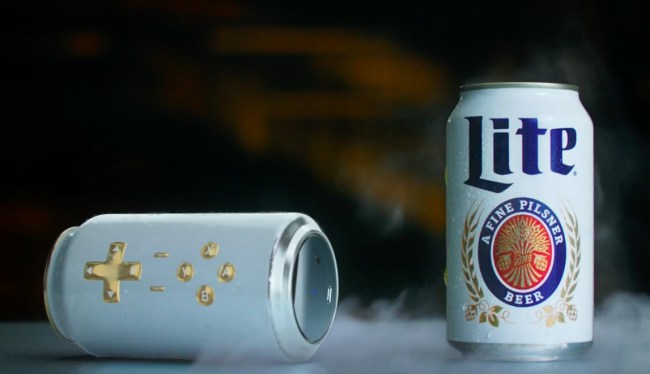 There was once a time when society had little respect for the lowly beer can, but in recent years, they’ve become the container of choice for an increasing number of breweries as people have slowly begun to realize the many benefits of the container when compared to bottles.

In addition to keeping light away from your precious liquid, you don’t have to worry about your valuable cargo shattering in transit (I still haven’t gotten the beer smell out of my suitcase after a bomber I was transporting on a fight fell victim to some questionable baggage handling).

However, if you’re like me, you have one major beef with beer cans: they don’t also double as a video game controller.

Sure, most people probably haven’t been clamoring for a beer can that lets you control games but that didn’t stop the good folks at Miller Lite from deciding to solve a problem I didn’t know existed in the form of the “Cantroller.”

It might seem like a belated April Fools’ Day prank but the company promises the Cantroller is very, very real. The rechargeable can—which actually contains 12 ounces of beer—features a fairly standard old-school layout and is equipped with Bluetooth that lets you connect it to your computer.

There are only 200 Cantrollers in existence, and if you’re looking to get your hands on one, you can do so by beating Eric Andre in a game of Street Fighter (you can sign up for the opportunity to take him on here).