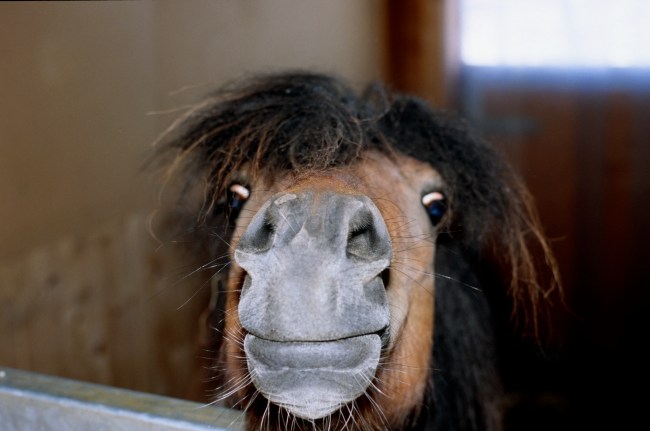 It seems like just yesterday the entire Internet was ready to stab each other after that clip went viral of the guy punching a passenger’s seat after she reclined. I wrote about that here. They’re both assholes.

Meanwhile, as all of that was going on we missed the real travel story of the week: a mini service horse traveling in first-class like some sort of 1%’er.

Things got OUT OF CONTROL with people falsifying the paperwork surrounding their service dogs because a lot of airlines weren’t allowed to ask you if the service pet was legitimate. I have friends who took advantage of this. I never would myself because I’m not an asshole. I’d sooner drive 1,500 miles up the coast with my dog in the back seat just to prove a point.

The woman says she paid a fortune to get her mini service horse in first-class, according to the NYPost:

Ronica Froese made the journey starting on Feb. 7 with her equine companion Fred, who was specially trained to make the high-altitude trip, according to WXMI.

“I paid an arm and a leg for tickets, but I did so because it was Fred’s first time and I wanted him to be comfortable,” Froese told the station.

“I wanted him to have the most room.”

Froese, who has trained Fred — who dressed in a sleek suit that made him look like a Lucha Libre wrestler — to be a therapy and a service horse, said everyone was “sweet as pie.”

She said that the “experience was way better than I actually anticipated.” (via NYPost)

A recent announcement by the Transportation Department signaled that soon only trained dogs will qualify to help the disabled on flights so this might be one of the last times we see a mini-horse flying in luxury like this.

Personally, I think Lil Sebastian is the only mini horse that qualifies for first-class travel.