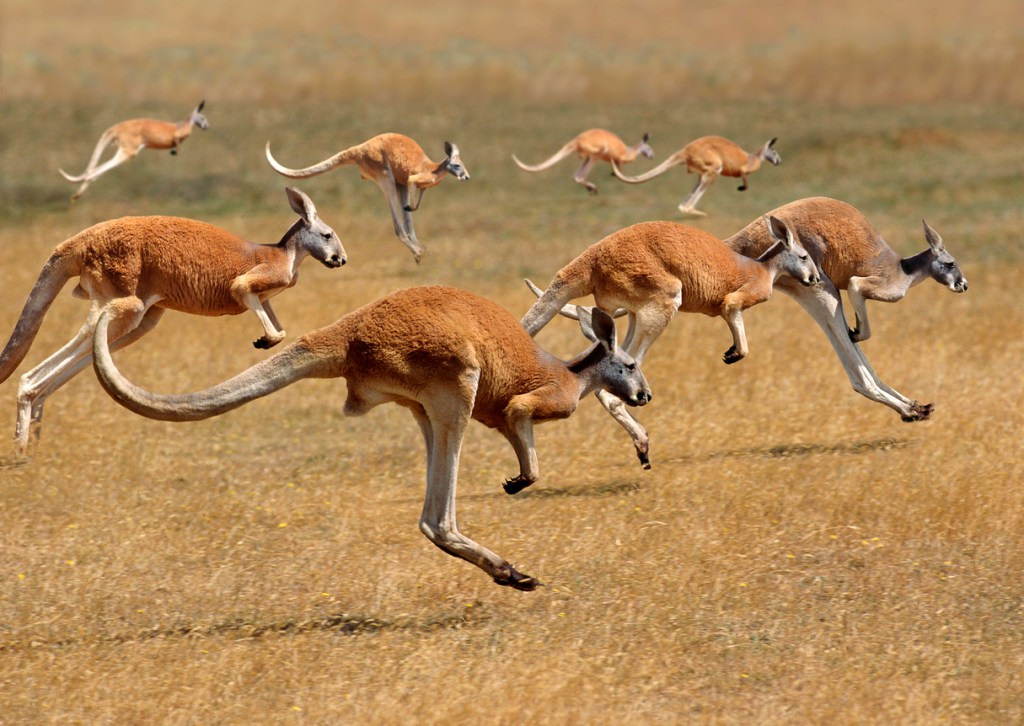 A tiny town in Queensland, Australia named Maaroom has been under siege by an unruly mob of kangaroos due to extreme weather recently. Local reports say these kangaroos are flocking to manicured lawns with huge mobs of them taking over everyone’s personal space.

Residents say there are anywhere from 70 to 80 kangaroos roaming the tiny town at any given moment. Some of the residents are carrying sticks to defend themselves, others are afraid to go fishing for fear of being ambushed by an angry and unpredictable kangaroo.

According to a report from ABC news in Australia, the town is home to just 220 residents. Residents say they’ve counted up to 80 kangaroos a day, and that’s just the ones they’ve seen. So there are currently more than 1 kangaroo for every 3 residents in the town and it’s causing major trouble.

Local resident Karen Sutcliffe told ABC News “there are too many to count, really. They’re constantly hopping around the park in between caravans.”

Another resident said they have to carry sticks as weapons. They added “I’ve been wanting to go fishing of an afternoon but I won’t do that, just in case a kangaroo gets me,” and “they’re just so quick you don’t know where they are.”

What’s causing these mobs to show up?

According to the reports, an ongoing La Niña weather pattern for the past several years has led to more rain than usual in the area. This, in turn, has led to grass growing on everyone’s lawns.

Their diet primarily consists of eating grass, so the kangaroos love perfectly manicured lawns with lush green grass to the point that they show up in huge numbers and chill out on the lawns. Especially when someone mows those lawns and there’s even easier grass clippings for them to eat. It’s not uncommon for residents to see 15 kangaroos chilling out on someone’s grass and they can get VERY territorial when babies/joeys are around.

One resident said “Some people are very good mowers and they keep it shorter, which means fewer kangaroos in your yard, and if you don’t mow as regularly, you’re going to get big herds coming into your yard. They’ve multiplied because we have provided a Sizzler smorgasbord for them.”

Golf courses are tough to maintain in Australia for this very reason. They see grass and they go nuts for it:

On the one hand, a large population of kangaroos feasting on a healthy supply of grass is good for the species. Massive fires a few years back devastated the kangaroo populations in Australia. But the flipside is close proximity to and familiarity with humans can spell trouble.

As these animals venture into towns they run the risk of getting hit by cars. And the interactions with people can involve attacks. Normally it’s male kangaroos who attack people, such as this wild encounter recently:

According to the initial report above, there have been seven attacks from kangaroos reported to the Department of Environment and Science in the past 12 months. That’s not a lot, in the grand scheme of things. But as they interact more an more with people it spells trouble.

Another issue is these animals have mobbed the town because of the lush grass growing. The nearby forest wouldn’t sustain that many kangaroos. So should the La Niña weather pattern end tomorrow, there suddenly wouldn’t be enough grass to sustain them and then there’d be an angry/hungry mob of kangaroos..

That fact that this guy used to be a boxing trainer probably came in handy https://t.co/yvxj0A0fey