Has There Ever Been A More Awkward Handshake Than This One Between The Leaders Of India And Portugal? Let’s Look At Some Other Contenders 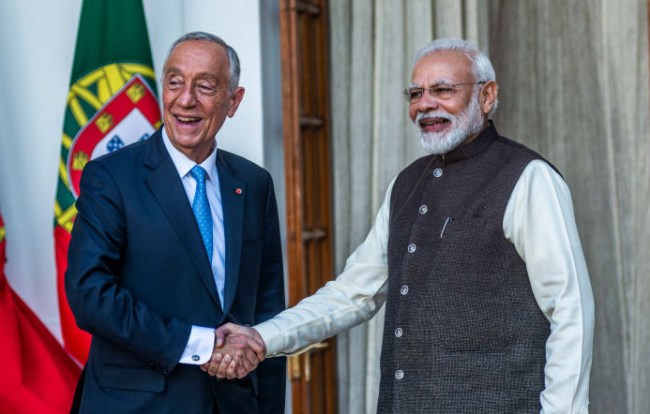 They’re so simple, yet at the same time, they’re astoundingly easy to mess up. Of course, when that happens, you can expect to replay that moment of cringe over and over again in your head each and every time you try to fall asleep for the rest of your life.

The saving grace for most people is that if you mess up a handshake, there isn’t anyone there to see it aside from you and the person on the receiving end of your sorry excuse for a greeting.

However, sometimes you get a Bubba Watson Green Jacket Ceremony Situation that is broadcasted to the masses and everyone has a good laugh.

With that said, Bubba’s brainfart at Augusta pales in comparison to the ultimate pressure cooker situation in the handshake realm: the world leader photo op.

It’s a handshake so important that sometimes diplomatic relations depend on it, but every once in a while, things end up getting weird.

This phenomenon was on display last week when India’s Prime Minister Narendra Modi and Portuguese President Marcelo Rebelo de Sousa had a meeting of the minds in New Dehli.

There’s a lot to break down here.

The initial contact was absolutely textbook, with Modi extending his hand (as he should have as the host because that’s just how things work) while the Portuguese president went with an angled approach which just screams “I’m a chill guy.”

Sadly, after a stellar opening to the shake, things got sketchier than trying to navigate through traffic in Mumbai during rush hour.

There’s constant movement, which in a way is good because two people just holding hands without moving them would be kind of weird. The problem in this instance is that the movement devolves into this weird back-and-forth motion that looks like both men are trying to saw a log during one of those lumberjack competitions that air on ESPN2 on Saturday afternoons.

The shake itself also goes on forever. I know the press needs to snag a photo but they would’ve had enough time to go back to the darkroom, develop that photo, and get back before the shake wound down.

However, in the grand scheme of handshaking, it wasn’t all that bad. Sure, it was goofy looking, but there have been some much more awkward examples of handshakes gone awry among world leaders in the past—especially these ones.

There are literally highlight reels of Trump handshake moments. The Donald has a tendency to be a little rough when he goes in for some shake, but in this instance, it was the absurd length—a full 19 seconds—that will live in handshake infamy.

On the receiving end was Japan’s Prime Minister Shinzo Abe. Again, things started out OK. It wasn’t quite as great as the now legendary opening to the Modi-Rebelo de Souza shake, but it was still acceptable.

However, a few seconds in, President Trump goes for this weird two-handed pat move on the back of Abe’s hand. Fortunately, that only lasted for a moment or two, but the shake continues with this jerky motion that reminds me of when you play tug-of-war with your dog and one of their chew toys.

The two-hand pat returns at the end, and then thankfully, it’s over. However, Trump then gives the press pool a double thumbs up in celebration of a well-done exchange, which is the handshake world’s equivalent of a catcher framing a pitch.

If I’m umping this one, I’d say it was about as close to the strike zone as 50 Cent’s infamous first pitch.

Just over a year before the Trump-Abe sitdown, Barack Obama found himself in the midst of another awkward handshake—if you can even call it that.

After 50 years of tension, the United States reopened relations with Cuba and part of this process involved President Obama visiting Havana, where he was greeted by Raul Castro.

In that video, you can see a perfectly acceptable handshake before the two went on stage, but after delivering some comments, the leaders stepped away from the podiums only for disaster to strike, as Castro inexplicably grabbed Obama’s forearm and held it high above his own head (he also gave it a nice little shake for good measure).

Castro was like a referee holding up the arm of a severely concussed boxer after a fight, with Obama being so confused by what was going on that all he could do was go along with it by giving a little wave.

I don’t know that there has ever been a world leader who hasn’t fallen victim to the dreaded three-way handshake. Honestly, the Geneva Convention should’ve outlawed these.

As you can see in the above video, Obama once found himself engaged in one with Canadian Prime Minister Justin Trudeau and Mexican President Enrique Pena Nieto because Barack apparently could not catch a break (props to him for trying to deflect the awkwardness by pointing something out in the background).

A couple of years later, Trump got caught up in what looks to be an absolutely insane five-way cross-armed monstrosity along with Vietnamese Prime Minister Nguyen Xuan Phuc and Philippine President Rodrigo Duterte.

This whole thing is just preposterous. I’m not sure what is supposed to be going on there, but whatever it is looks like a handshake if it were painted by M.C. Escher.

This initial handshake itself wasn’t ruined, but after this Japanese state dinner between Bush Sr. and then-Japanese Prime Minister Kiichi Miyazawa, every subsequent shake had to have a dusting of awkwardness accompanying it.

This dinner was held on January 8, 1992. Earlier in the day, Bush had been playing doubles tennis along with the Emperor of Japan. Maybe he was worn out from the emperor beating the wheels off him on the tennis court, but regardless of what happened, President Bush was clearly not feeling well.

Things seemed to be going perfectly fine until Bush suddenly vomited in Prime Minister Miyazawa’s lap and passed out. Staff members, as well as First Lady Barbara Bush, rushed to the President’s side.

I truly can’t believe that they don’t teach kids about this one in schools. In fact, I only learned about it from the same place I learned most of what I know: an episode of The Simpsons.

Fortunately, President Bush ended up being alright, but you have to imagine this incident was the first thing that popped into Miyazawa’s head every time he met a world leader from then on out.

Disagree if you’re so inclined, but this one has to take the cake for not just the worst handshake between two government officials but possibly the worst one of all time.