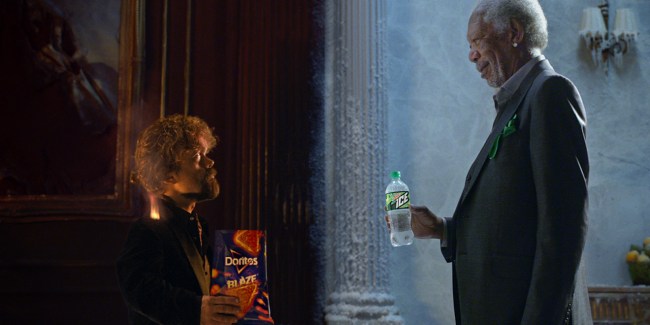 We’re getting close to the Super Bowl and that means that the Super Bowl commercials leak early so the advertisers can get some free exposure. Today’s fantastic Super Bowl ad borders on the more absurd side because it features a rap battle between Morgan Freeman and Peter Dinklage. The Academy Award-winning Freeman lip-syncs Missy Elliott’s “Get Ur Freak On” as he sips some lemon-lime-flavored Mountain Dew Ice as the room gets covered by ice. Meanwhile, the Game of Thrones actor that plays Tyrion Lannister chows down on spicy Doritos Blaze chips with flames and fireballs all around while rapping Busta Rhymes’ verse in Chris Brown’s “Look at Me Now.”

PepsiCo owns both Doritos and Mountain Dew so this joint Super Bowl ad sells both of their products. The commercial features paintings of Busta Rhymes and Missy Elliott that come to life. The joint Mountain Dew and Doritos advertising will also feature an exclusive Snapchat lens on Super Bowl Sunday where fans can record themselves attempting to lip-sync. Good luck trying to keep up with the speed-rapping Busta Rhymes. Check out all of the 2018 Super Bowl commercials HERE.