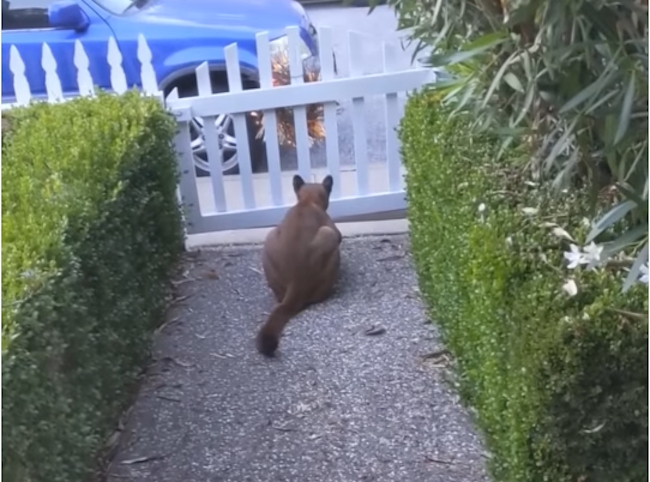 I never feel comfortable sending my kids outside alone to play. The worst-case scenarios always pop into my head.

One of the kids will get run over by a car, fall out of a tree and break body parts, kidnappers, mistaking gasoline for Mountain Dew – the imagined tragedies are endless.

The thought of a mountain lion stalking my kids never popped into my head but it sure as hell will after watching this intense footage of the massive cat stalking a bunch of neighborhood kids in California.

“I thought it was somebody’s dog that had gotten into the yard and I was like, “hey get out of here! then it turned and that’s when I was like, “oh my god! it’s a mountain lion!” said Timothy Kerrisk, the guy who caught the cat on video.

Kerrisk told KRON 4 the mountain lion chased his cat through his yard earlier that same day.

After being spotted, the mountain lion jumps a fence and hides under a neighbor’s truck.

The neighborhood backs up to hills and a wooded area that’s full of wildlife, and mountain lions are common in the area, but this particular lion is bigger than the rest.

Another neighbor, Andrew Mooney, got a better look at the stalker on his surveillance cameras.

“The width of a 2020 Ford F-150 from nose to tail. It’s the biggest one that I’ve seen. We have a lot of sightings of mountain lions around here, and they all seem to be small bobcat size. This one was well fed,” Mooney said.

Neighbors don’t want the cat caught, instead, they’re keeping a closer eye on their pets and kids.