Movie Theaters Want To Know Why People Don’t Go There Anymore, Twitter Has Lots Of Answers 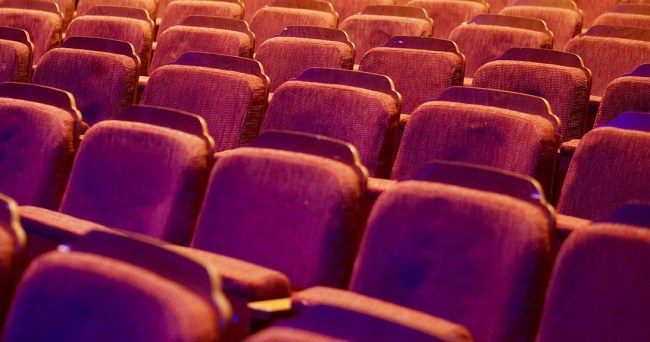 MoviePass isn’t the only film-related company wondering how to make more money with movies. Movie theaters themselves are also trying to figure it out.

While box office numbers are up this year from 2017, when compared to the glory days theaters are still nowhere as packed as they used to be.

Now, for some reason, a podcast from December, Bloomberg’s “Material World”, has been making the internet rounds the past day or so and let’s just say we’re hoping that movie theater chains like AMC and Regal are paying attention.

Lindsey and Jenny talk with Anousha Sakoui, who covers the film industry for Bloomberg, about how movie theaters got into this mess and the challenges that face them in regaining media dominance. Some startups, like MoviePass, which allows subscribers to see a movie every day for a month for $9.95, are trying to get customers to go to more films by offering them “bad-movie insurance,” says Chief Executive Officer Mitch Lowe. Theater-chain Cinemark is also offering a subscription service and upgrading its locations so customers can enjoy nicer seats and even perks like food and alcohol. Will these efforts to modernize be enough to win back consumers?

I speak for everyone:

1. Start movies on time. Trailers play before that time.

2. Ushers who stay in the theater during the movie and remove assholes.

I don’t even go to a movie I want to see until 15 minutes AFTER the stated show time because I know there will be at least 25 minutes worth of trailers and other advertising.

1. Only movie trailers before the movie, no commercials, no "The Twenty", no FirstLook with Maria Menounos, no "student short films" that are just about drinking Coke

3. Let me smoke weed in the theater https://t.co/WuJLxGbUeD

Assigned seating would be nice. Also, this…

Take the dimming 3D polarizer off the projector for 2D movies.

Jam cell signals, and put up signs letting people know you’re doing that, so they can decide if they’re on board.

Police your theaters for noisemakers.

Care about your theaters. https://t.co/Z9JtMLl06U

Honestly? Boutique theaters. I don't need a big IMAX screen. Let me watch a movie in a room that fits roughly 15-20 people. Put some sofas in there. Serve pizza or ramen. Give out blankets. https://t.co/HWkYbp0tSJ

Movies that aren’t sequels, remakes, MCU, animated, or 104% CGI. TV is better rn and I don’t have to get dressed to watch it

1) Let me have a beer while I watch the movie. 2) Let me pause the movie when I (inevitably) have to pee.

The ability to literally murder people who talk loud or use their phones https://t.co/iKWaerfZx8

Pretty sure I could get on board with that last suggestion.