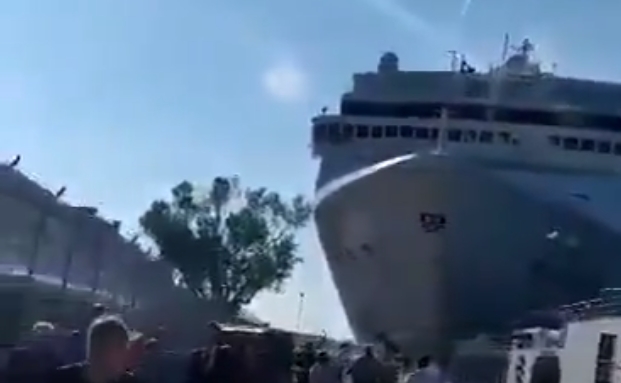 A cruise ship lost control then slammed into a tourist ferry and hit the dock in Venice, Italy, on Sunday. The cruise ship accident injured at least five people.

The MSC Opera is a 65,591-ton 824-foot-long cruise ship that accommodates 2,679 passengers. At around 8:30 a.m. on Sunday, the massive cruise ship attempted to dock in Venice in the Giudecca Canal, a major thoroughfare that leads to the city’s famous Saint Mark’s Square.

That’s when the vessel lost control and collided with a tourist ferry, at least two people were catapulted into the water. Panicked people on the dock fled for their life as the out-of-control cruise ship sailed directly towards them.

This is the moment a huge cruise ship crashes into a tourist boat and the dockside in Venice, as dozens of people run away in panichttps://t.co/7ErXUtt6qr pic.twitter.com/xi92IqvAkI

The MSC Opera’s horns blared to warn people as it slowly crept towards the dock, but it was unable to stop or turn. The ship built in 2004 encountered a mechanical issue where the ship’s engine was apparently locked. The two towboats guiding the cruise ship could not prevent the collision.

Australian tourists onboard the MSC Opera filmed the moment of impact.

Breathless view of from the cruise ship itself crashing into Venice pier #grandinavi pic.twitter.com/rSccvAyTZv

Venetians who lived nearby were alerted to the cruise accident and recorded video of the crash.

Wow, this just happened outside our apartment!! pic.twitter.com/OfSOdCU2Br

Tourists on the other side of the canal also captured video of the collision.

My God. Absolutely frightening video of what happened this morning in Venice when a cruise ship lost control approaching the pier #grandinavi pic.twitter.com/2rJseEdk4N

This is the aftermath of the crash.

Thankfully the five people injured from the crash were not wounded seriously. The ship was returning from its cruise which departed from Venice on May 26 and traveled to Kotor, Montenegro, and Mykonos, Santorini and Corfu in Greece.

The runaway cruise ship prompted the internet to reference the movie Speed 2: Cruise Control and “Speed 2” was trending on Twitter.

The 1997 action movie featuring Sandra Bullock that has a cruise ship hacked by Willem Dafoe’s character John Geiger and tries to crash it into an oil tanker. There were plenty of jokes about the cruise ship incident to the sequel to 1994’s Speed with Keanu Reeves.

Don’t watch the following two Speed 2 clips if you don’t want this 20-year-old movie spoiled for you.