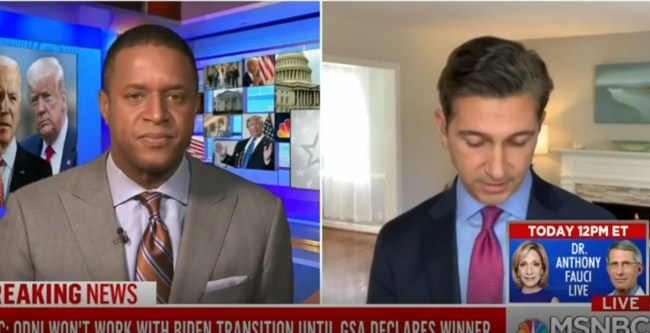 No sooner did I publish a story about Fox News anchor Sandra Smith getting busted on hot mic being hilariously frustrated with a guest, MSNBC News correspondent Ken Dilanian took it up a notch by getting caught swearing live on the air in another hot mic mixup.

During the broadcast on Tuesday, MSNBC news anchor Craig Melvin was attempting to throw it to correspondent Ken Dilanian, but it appears either Melvin wasn’t aware Melvin was about to do so, or just flat out didn’t hear him.

Melvin asked Dilanian what he had learned about the American intelligence community and the upcoming presidential transition.

“Ken Dilanian has some new reporting on something we talked about at the top of the hour,” said Melvin. “How the Trump administration is handling the transition with the incoming Biden team, or not handling it, we should say to a certain extent. This time it involves our intelligence community. Ken, what have you learned, sir?”

After a brief pause, instead of responding, Dilanian looked down at something while uttering, “Oh sh*t. F**k.” Then he just disappeared from the screen.

The look on Melvin’s face was utterly priceless. 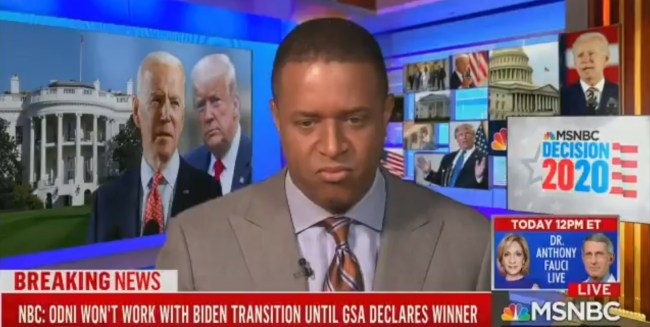 “Okay, I think we, uh, lost Ken for a second. We’ll try to get him back there,” said Melvin.

Nothing, and I mean nothing, has made me laugh harder in 2020 than this clip. pic.twitter.com/UzWjXOdgjP

Later in the hour, Melvin was back, once again introducing Dilanian , “We want to try to get back to NBC’s Ken Dilanian with breaking news. We were having technical difficulties a few moments ago. Ken has reporting on how the Trump administration is handling the transition with the Biden team, specifically with our intelligence community. Ken, what have you learned?”

The “technical difficulty” was, of course, Dilanian swearing on live TV.

“Hey, Craig. First, I want to sincerely apologize to viewers who may have heard me use profanity at the top of the last hit,” Dilanian said to Melvin. “What we’re learning today is the potential impact of the resistance of the trump administration to acknowledge the Biden win in the intelligence arena specifically.”

So sorry for the profanity I used on air last hour. I was experiencing some technical difficulties and mistakenly hung up on the control room, though my mic still was on. Perils of playing producer, cameraman and tech support all at the same time from home. #2020 🙃

Turns out no one really seemed to, dare I say it, give a shit.

We were just worried that you had received some bad personal news. Glad to hear that you are OK.

[Sigh of relief]. A bunch of us were holding our breath wondering what apocalyptic awfulness you might have just learned.

At this stage, profanity is the LEAST of anyone's concerns.

how am i supposed to explain this to my very small children who love national security and intelligence news, ken, they’re innocent