Hold On To Your Butts: Archaeologists Opened Mummy Tomb That Was Sealed For 2,600 Years 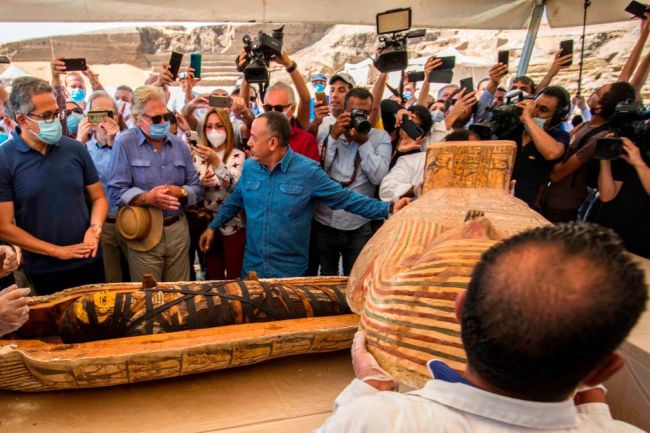 Does anybody know what Brendan Fraser is up to these days? We might want to get his phone number. Last month, Egypt’s Ministry of Tourism and Antiquities announced they had discovered 13 unopened mummy coffins. After further inspection of a necropolis, archaeologists found at least 59 ancient Egyptian mummy coffins that were sealed for over 2,600 years. Instead of letting the dead lie, archaeologists tempted fate by opening the mummy coffins. Smart move, what’s the worst that could happen…a global plague?

The foreboding coffins were discovered at Saqqara, an extensive burial ground located near the ancient Egyptian city of Memphis. The ancient cemetery 20 miles south of Cairo housed these impeccably-preserved wooden coffins, where they were entombed near the Step Pyramid of Djoser, the world’s oldest complete stone building complex of its size. The 4,700-year-old Djoser’s Step Pyramid was built in the 27th century B.C. for third-dynasty pharaoh Djoser.

On Saturday, Egypt’s Ministry of Tourism and Antiquities not only unveiled the mystical sarcophagi, but decided to crack open a coffin. Inside was a mummy wrapped in an ornate burial cloth, who probably did not want to be awakened.

Preliminary analysis suggests that the bodies inside the painted pristine coffins belong to priests and other elite figures of the Pharaonic Late period, which ranges from 664 to 525 B.C., according to Secretary-General of the Supreme Council of Antiquities, Mostafa Waziri. Perhaps, 2020 is not the right time to be disturbing the gravesites of holy men from ancient Egypt? Let’s hope the archaeologists brought in some cats to protect themselves.

Waziri said the sarcophagi are “in perfect condition,” and the discovery is “the gift of the century.”

Honoured to be invited by the Minister of Tourism and Antiquities HE Khaled El Anany to Saqqara for the announcement that a new tomb of mummies has been discovered. I saw one being opened for the first time in 2600 years! Truly amazing! @TourismandAntiq @MFATNZ 🇪🇬🇳🇿 pic.twitter.com/5oLfAM7zAV

The mummy tomb, which has been sealed for 2500 years, has been opened for the first time. pic.twitter.com/KWGT95girv

There is a chance that there could be even more unopened coffins. There is a sealed door where there could be more mummies, according to Khaled el-Anany, the first Minister of Antiquities and Tourism.

The coffins will be transported to the new Grand Egyptian Museum near the Giza Pyramids where they will be put on display when the museum opens in 2021. Do you want to be cursed…because that’s how you get cursed? Did Rick O’Connell teach you nothing? Death is only the beginning.

RELATED: Curse Of The Pharaohs: 12 People Die After Opening Sarcophagus In Ancient Egypt According To Documentary

RELATED: Mysterious Black Sarcophagus Opened Despite Fears Doing So Would End The World, But Contents Are Scary