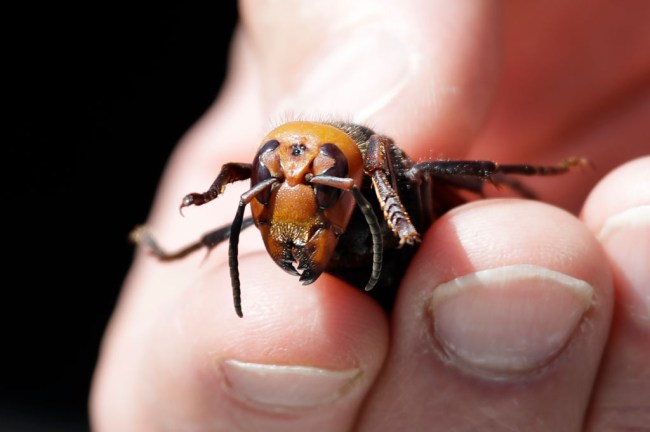 Late last year, a deadly threat surfaced in Asia that slowly began to make its way around the globe before picking up the pace and treating us to one of the most miserable periods of time the world has seen in recent memory.

As if we didn’t have enough to worry about already, The New York Times treated us to some truly uplifting news earlier this month when it was reported that another potential killer had made its way across the Pacific in the form of the Asian giant hornet, insects more commonly referred to as “murder hornets” for reasons you should be able to glean from that nickname.

Murder hornets live up to their moniker by killing 50 people every year in Japan, and even if you’re lucky enough to avoid that fate after being stung, you’ll get to experience what one man who willingly subjected himself to their wrath dubbed “the most painful sting in the world.”

Some experts tried to assuage the public by saying the hornets aren’t as big of a threat as they’re made out to be, stressing they have only been found in a fairly small area near the Canadian border and none have been sighted in 2020…at least not until now.

According to The Globe and Mail, a beekeeper named Laura Delisle found and killed a murder hornet in Langley, Brtish Colombia, which is located out of the zone the murder hornets were thought to be contained to. While there’s no reason to believe they’re going to spread across the continent at any point in the near future, apiculturist Paul Van Westendorp said he believes there will be an uptick in sightings in the coming months.

While humans who are on the receiving end of a murder hornet’s sting are going to have a bad time, the biggest threat they pose is to honey bees, who can have their hives destroyed in a matter of hours when invaded by the predators that seem to take pleasure in ripping their heads off and feasting on their bodies.

With that said, Japanese bees seemed to have mastered the art of defending themselves by swarming the hornets and covering them to a point where they cook them to death, so it might be looking into if there’s a way to get them on the payroll.