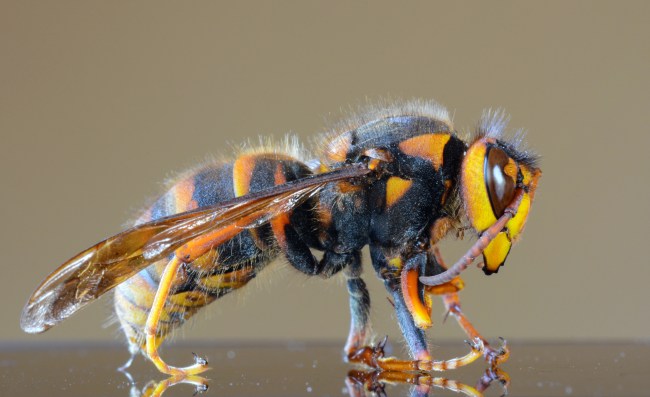 2020 has been a rollercoaster where every week brings so much news it almost feels like each weeks lasts a year. ‘Murder Hornets‘ dominated many headlines over the past week after news broke that a massive species of hornet had made its way to America.

You can’t name an animal ‘Murder Hornet’ and not expect an extreme reaction from the public. This was a certainty. By now I’m guessing you’ve seen the videos of murder hornets fighting other bugs and/or getting annihilated by hundreds of bees, and if you’re like me you likely freaked out a little bit when you saw this photo showing just how large they are:

Me: these Murder Hornets can't really be all that bad, can they? It has to just be a scary name

So how much should we be panicking? According to a report from bug experts, not all that much. They say that unless you’re a bee or a beekeeper there’s really no reason for anyone to freak out. They also point out that humans have been living with these Murder Hornets for a thousand years. Furthermore, they point out the global bee population was already under threat before Murder Hornets every made it to America:

Numerous bug experts told The Associated Press that what they call hornet “hype” reminds them of the 1970s public scare when Africanized honeybees, nicknamed “killer bees,” started moving north from South America. While these more aggressive bees did make it up to Texas and the Southwest, they didn’t live up to the horror-movie moniker. However, they also do kill people in rare situations.

This time it’s hornets with the homicidal nickname, which bug experts want to ditch.

“They are not ‘murder hornets.’ They are just hornets,” said Washington Agriculture Department entomologist Chris Looney, who is working on the state’s search for these large hornets.

The facts are, experts said, two dead hornets were found in Washington last December, a lone Canadian live nest was found and wiped out last September and no live hornets have yet been seen this year. (via ABC)

In an interview, entomologist Chris Looney said the number of people who are stung by these Murder Hornets and then have to seek medical attention is extremely small. The sting is rough but one sting, or a handful of stings, likely won’t take down an adult.

Experts also caution that we should be most worried about mosquitoes and not Murder Hornets:

“It’s a really nasty sting for humans,” said University of Georgia bee expert Keith Delaplane. “It’s like the Africanized bee … A dozen (stings) you are OK; 100 not so much.”

University of Illinois entomologist May Berenbaum said of the worry: “People are afraid of the wrong thing. The scariest insect out there are mosquitoes. People don’t think twice about them. If anyone’s a murder insect, it would be a mosquito.”

Mosquitoes are responsible for millions of yearly deaths worldwide from malaria, dengue fever and other diseases, according to the World Health Organization. Asian giant hornets at most kill a few dozen people a year and some experts said it’s probably far less. (via ABC)

Killing ‘a few dozen people a year’ is less than the global number of deaths (150) attributed each year to falling coconuts. In this context, we really don’t have much to worry about with these murder hornets just yet. Entomologist Doug Tallamy says this is all “99% media hype” and he’s tired of the hype.

Other experts say the idea of an ‘invasion’ is asinine when it’s been one nest and one individual hornet. That’s not anything close to an invasion. So it’s time for everyone to go back to chilling out inside and not worrying about Murder Hornets, right?

But it’s still only May. June could bring Angry Murder Hornets and July could send us Colossal Ravaging Hornets that were sent from Lucifer’s armies to wipe out civilization.