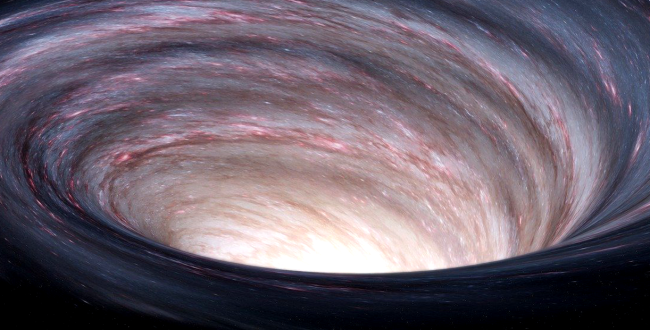 Remember the iconic tagline for the movie Alien? “In space no one can hear you scream.”

Well, no one may be able to hear you scream in space, but a audio clip shared to social media by NASA this week is making some people want to scream right here on Earth.

The creepy sound was recorded from the black hole at the center of the Perseus galaxy cluster.

“Astronomers discovered that pressure waves sent out by the black hole caused ripples in the cluster’s hot gas that could be translated into a note – one that humans cannot hear some 57 octaves below middle C,” said NASA about the sound.

“The popular misconception that there is no sound in space originates with the fact that most of space is essentially a vacuum, providing no medium for sound waves to propagate through,” NASA continued. “A galaxy cluster, on the other hand, has copious amounts of gas that envelop the hundreds or even thousands of galaxies within it, providing a medium for the sound waves to travel.”

The misconception that there is no sound in space originates because most space is a ~vacuum, providing no way for sound waves to travel. A galaxy cluster has so much gas that we've picked up actual sound. Here it's amplified, and mixed with other data, to hear a black hole! pic.twitter.com/RobcZs7F9e

NASA also explained, “The sound waves astronomers previously identified were extracted and made audible for the first time. The sound waves were extracted in radial directions, that is, outwards from the center. The signals were then resynthesized into the range of human hearing by scaling them upward by 57 and 58 octaves above their true pitch. Another way to put this is that they are being heard 144 quadrillion and 288 quadrillion times higher than their original frequency. (A quadrillion is 1,000,000,000,000,000.)”

The black hole sound clip shared by NASA on Sunday has now been listened to almost 14 million times with numerous people being completely creeped out by the horror movie vibe the sound gives off.

“Good news. Black holes sound exactly as terrifying as you might have guessed,” one person replied to NASA.

“It sounds creepy but there’s a perfectly scientific explanation,” another person responded. “See black holes are made of million of compressed stars that they sucked up and ate, some of which had whole civilizations around them. The sound is just them their souls screaming in eternal torment, that’s all.”

Fun Fact: Space is filled with the endless groaning of the souls of the damned. https://t.co/WzOAj0XebD

This is utterly terrifying. If this was just ambience sfx made for use in film it wouldn't be as spooky as it is with the knowledge that this is REAL. This is what a gigantic, all-consuming demon from light years away sounds like. https://t.co/tPOb3AswdX

Thanks, I hate it. https://t.co/nULhpNpLhx

now somebody tell me, how can I unhear this!? https://t.co/1Ca5WlyF9t