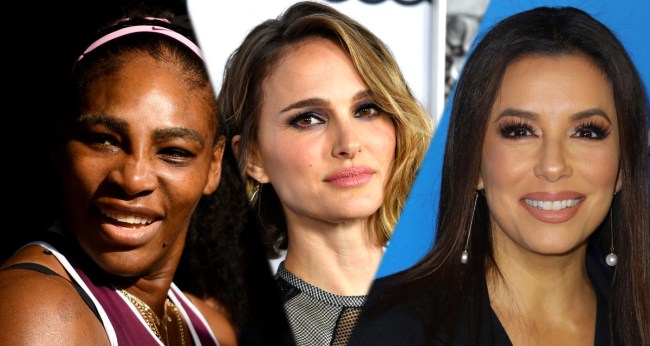 The city of Los Angeles certainly loves its soccer. With two teams participating in MLS, the Galaxy and Los Angeles FC, and both drawing over 22,000 per game, there is no shortage of soccer fans in and around Tinseltown.

Now, a group of rich and famous women are looking to get in on the action, as TMZ Sports reports actress Natalie Portman, tennis legend Serena Williams, actress Eva Longoria, and other powerful women (and a couple of powerful men) are looking to add a Los Angeles women’s soccer team to the National Women’s Soccer League (NWSL).

The group is calling itself Angel City — and they’re working with the National Women’s Soccer League to establish the city’s first pro team.

The NWSL is the women’s version of the MLS — but they only have 9 teams throughout the country in cities like Portland, Orlando, Tacoma, etc.

But, the Angel City group claims there’s heavy fan demand in Los Angeles … and they’re rallying together to get a team here, stat.

“After spending time with the USWNT players, their union rep, and getting to know some of the owners of the NWSL and the league’s supporters, it became clear having a team in L.A. could not only elevate the league and players’ exposure, but also bring these incredibly talented women to the city of L.A. — my city,” Portman told Sportico. “We have the ability to engage, promote and support the best players in the world in the most popular sport in the world on a yearly basis, not just every four years.”

Reddit co-founder (and husband of Serena Williams) Alexis Ohanian told Sportico, “This is where esports was five years ago, except these teams are far more marketable; the athletes are far more popular and have already transcended the sport and culture. And while I am all for [what] this represents — a generation of athletes who should get paid what they’re worth, who should get treated fairly and equally—I also know this is tracking in the right direction. The free market is actually going to show that this has been undervalued for way too long by far too many people.”

“Our story from the beginning was different — from starting with three founding women to building a movement before even having the money, stadium, rights or fans [to now] being able to grow our list of founding investors,” Portman added. “We believe in setting higher expectations on and off the field, for our team, players and fans. Success to us isn’t only on the field, but our impact in our community, payback to our players and entertainment of the world. We are not a legacy team but a team of activists, athletes and entrepreneurs who are used to challenging the status quo and reshaping expectations.”

This new team will be the first professional women’s team in Los Angeles since the Los Angeles Sol of the defunct Women’s Professional Soccer League was disbanded in 2010.

Welcome to the @NWSL, Angel City! Been 10 years since the last professional women's team in Los Angeles, 10 long years. It's about time! https://t.co/Ie51iArIfd