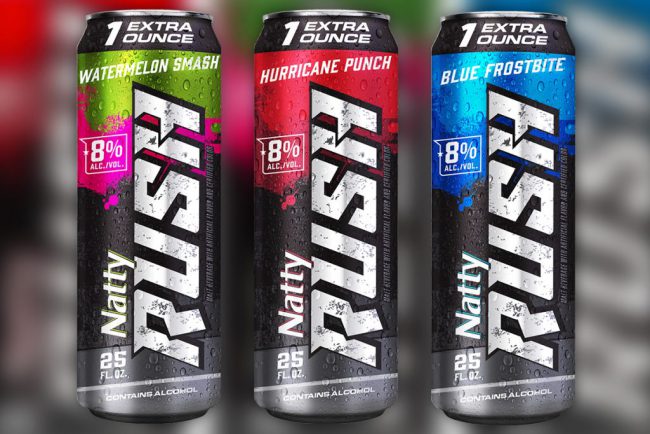 Natty Light. Natty Ice. Natty Daddy. Now, Natty Rush. Hate on the idea of getting blind drunk all you want but no other industry has seen the innovation and evolution that the jet-fuel alcohol industry has. Cancer still a thing? Last time I checked. And hey sex scientists: how we progressing on contraceptives that are literally anything other than condoms? Yeah that’s what I thought. You back to work, virgins.

For those of you who object to paying $12 for a craft beer at a Brooklyn gastropub that smells of rich mahogany and pretentiousness, boy do I have good news for you.

As long as we have colleges, we will have college kids. With that in mind, and especially given the younger-demographic popularity of Four Loko, AB-InBev plans to release this fall a new, high-gravity, flavored malt beverage (FMB) called Natty Rush. The product – part of the Natural brand family and available in 8 or 12 percent alcohol by volume – will be positioned as to compete with MillerCoors’ existing Steel Reserve Alloy Series. Frat stars, rejoice!

Dude, I graduated seven years ago and I’m going to chugging these bad boys in my letterman jacked while watching my highlight reel from my senior year football season on JV.

Get a load of these names too: “Watermelon Smash” for when you’re looking to smash your head through some drywall, “Hurricane Punch” for when you have a hankering to punch a senior citizen, and “Blue Frostbite” which will be the same color as your testicles when your lady witnesses you puking down your chin.

Natty Rush will be reportedly be sold in 25-ounce cans and the 12 percent ABV version, dubbed  Natty Rush + will debut around the same time in select test markets.

Now excuse me while I bring this breaking news to my college group chat.