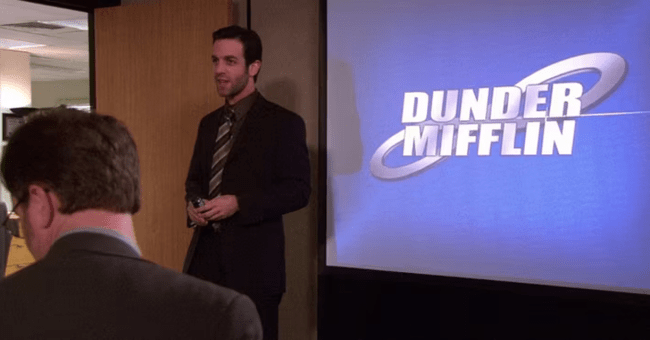 In a story that sounds like it would make a great episode of The Office, NBCUniversal says they attempted to register the name Dunder Mifflin with the U.S. Patent and Trademark Office, but were turned down because someone else had already done it several years earlier.

As a result, NBCUniversal is now suing the company that already registered the name Dunder Mifflin.

The lawsuit, filed in U.S. District Court for the Central District of California, claims Jay Kennette Media Group is being a “trademark squatter” and is selling unauthorized merchandise using the Dunder Mifflin name.

NBCUniversal claims the Jay Kennette Media Group “built a business based on registering trademarks belonging to others,” reports Deadline.

The lawsuit also claims that the defendant registers these trademarks so they can either sell them back to the “rightful” owners of, as is the case with Dunder Mifflin, selling branded merchandise associated with the trademark.

According to the website Trademarkia, a search engine and database of more than 8 million trademarks and logos, Jay Kennette Media Group also holds several other trademarks including those for the Tree Hill Ravens (from One Tree Hill), Dillon Football (from Friday Night Lights), Hillman College (from A Different World), as well as Hartford Whalers (the NHL team that moved and became the Carolina Hurricanes).