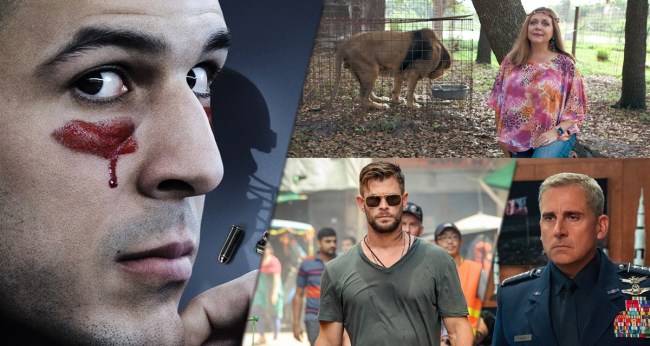 Do you know who the pandemic has been really good to? Other than billionaires? The ever-expanding list of streaming services like Netflix.

Seeing as how so many of us have been stuck at home, not able to do things like go to a movie theater, we have been spending an inordinate amount of time watching shows and movies on our TVs, phones, tablets, laptops, and anywhere else we can get our fix.

Of course, the OG of streaming services, Netflix, has been a very popular destination in the times we have given up on ever going out and socializing again, but what shows and movies were we tuning into as we fell deeper and deeper into isolation?

Glad you asked! Because Netflix was kind enough to provide us with a comprehensive recap of just exactly what it was that we watched in 2020.

Viewing of foreign language titles was up over 50% this year (compared to 2019) with The Platform (Spain), Barbarians (Germany) and Rogue City (France) being the most popular.

K-drama (viewing almost tripled) and anime (up over 100% in the US) were also big winners. Kingdom S2 and The King: Eternal Monarch were our favorite K-dramas, while Pokémon: Mewtwo Strikes Back – Evolution and Blood Of Zeus were the anime titles that most piqued our interest.

Here’s another statistic that should shock absolutely no one: We spent twice as much time watching documentaries and reality TV in 2020 than we did in 2019, back when we all had lives.

Netflix’s top docu-series were Tiger King and Killer Inside: The Mind of Aaron Hernandez. The most successful documentary features were American Murder: The Family Next Door and The Social Dilemma. And on the reality TV side, Floor is Lava, Love is Blind and Too Hot To Handle took top honors this year.

We also watched twice as much romance this year as in 2019 with The Kissing Booth 2, Princess Switch: Switched Again and To All The Boys P.S I Still Love You leading as most-watched.

Comedies peaked in viewership in October with Hubie Halloween, The Wrong Missy, Space Force, Holidate and Kevin Hart, Zero F**ks Given being the most popular comedies of the year overall.

The most popular food and home shows on Netflix in 2020 were Get Organized with The Home Edit, Nailed It!, Million Dollar Beach House, The American Barbecue Showdown and Crazy Delicious.

When it came to entertainment for kids and families The Christmas Chronicles: Part Two, The Willoughbys, The Angry Birds Movie 2, Jingle Jangle: A Christmas Journey and Over the Moon topped the charts.

Extraction, Spenser Confidential, The Old Guard, Project Power and Cobra Kai were the most popular action titles of the year.

Depending on what mood we seemed to be in, here are the top five titles for 2020… 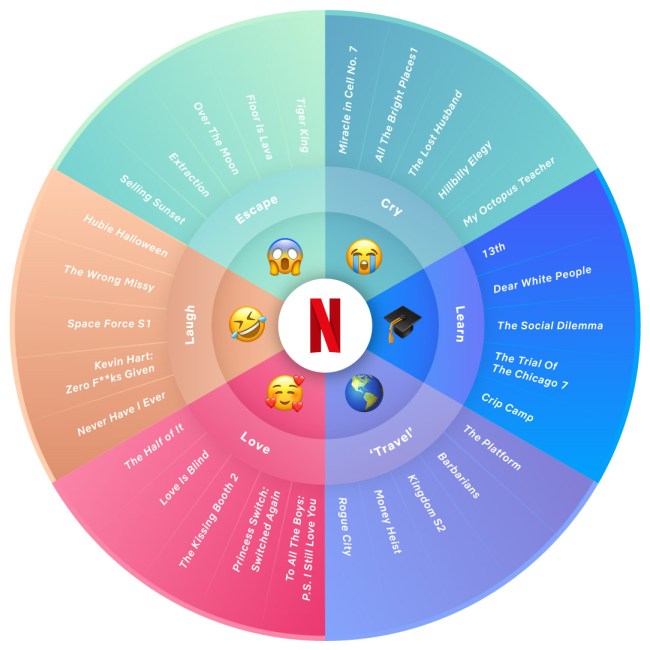 Here’s to hoping we all have the freedom to watch a little less TV in the year 2021.