Aaron Hernandez’s Fiancee Discusses His Sexuality, The Documentary, And The Fact She Believes He’s Innocent 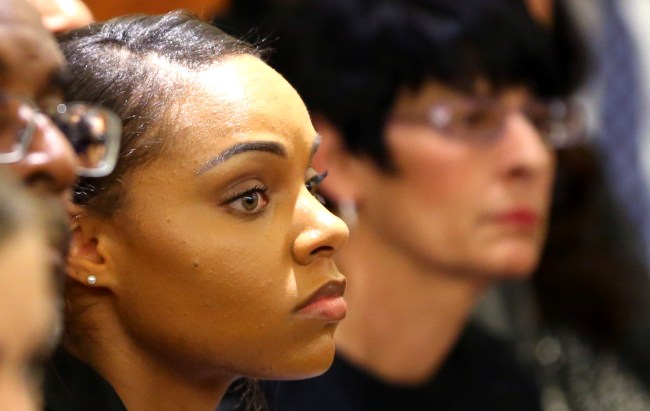 The Netflix documentary Killer Inside: The Mind Of Aaron Hernandez, while fascinating, has created its share of controversy with its portrayal of the late football star, his fiancee Shayanna Jenkins, and murder victim Odin Lloyd.

Odin Lloyd’s family was reportedly “blindsided” by the show, having not given their approval for any of the footage or photos that were used relating to them and Mr. Lloyd.

On the other side of the coin, Aaron Hernandez’s lawyer Jose Baez issued a scathing response to the Netflix documentary, saying, among many things, “These producers lied directly to my face.”

Shayanna Jenkins has for the most part been silent since the documentary’s release, only posting a message on social media thanking people for their support.

On Wednesday, Jenkins broke her silence with an appearance on Good Morning America.

In an interview with ABC News’ Amy Robach, Jenkins discussed Killer Inside: The Mind Of Aaron Hernandez and the claims that the former New England Patriots tight end was gay or bisexual.

“Do you still believe your fiance was innocent?” Robach asks in the interview.

“Yes, of course I do,” Jenkins responds. “I’d be a cold person to leave someone that had nobody at all.”

“What was in the documentary that shouldn’t have been, in your opinion?” asks Robach.

“I would have to say Aaron’s sexuality,” replies Jenkins. “You can’t describe someone’s sexuality without them being here. Although I have a child with Aaron, I still can’t tell you how he was feeling inside. No one can.”

Robach then asks if she’d like to comment on that aspect of the documentary and the rumors that Hernandez may have been bisexual or gay.

“If he did feel that way or if he felt the urge, I wish that I… I was told,” says Jenkins. “And I wish that he, you know, he would’ve told me ’cause I wouldn’t… I would not have loved him any differently. I would have understood. It’s not shameful and I don’t think anybody should be shameful of who they are inside, regardless of who they love. I think it’s a beautiful thing, I just wish I was able to tell him that.”

As for whether she was approached by the documentary’s creators to participate, Jenkins replied, “I was approached. They offered compensation for my participation. I wanted to leave it in the past and let my daughter grow without her having to have bad memories to look back on.”

The fiancee of the late Aaron Hernandez is speaking out for the first time since the release of a Netflix new docuseries on the life of the football-star turned-convicted killer. @arobach reports. https://t.co/fu296hhrc3 pic.twitter.com/KuQtG0ctWI