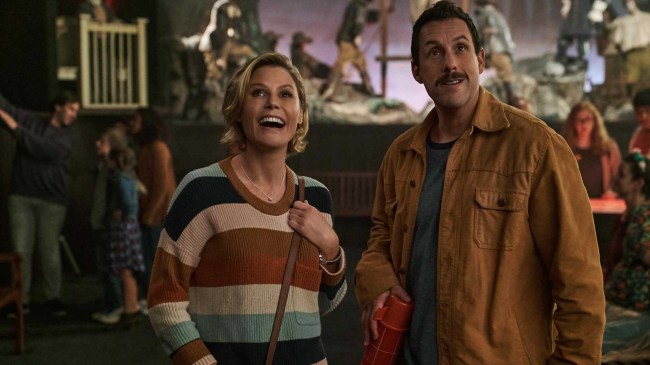 He tried warning us. He did. And we didn’t listen.

Following the Academy’s decision to snub Adam Sandler for a Best Actor nomination for his work in Uncut Gems, The Sandman told Howard Stern back in January that he would have his revenge.

“If I don’t get it, I’m going to f–king come back and do one again that is so bad on purpose just to make you all pay. That’s how I get them,” Sandler said.

Well, the man wasn’t lying, as his latest masterpiece Hubie Halloween hit Netflix this week and is everything he promised and then some.

Less of a movie and more of a collection of fart noises and funny voices, Hubie Halloween is simultaneously everything that’s great and awful about the last decade of Sandler’s career.

Still, even if you aren’t a fan of Sandler’s recent work, it’s got enough meta-references to past Sandler glory to make it worth the watch (especially if you et as uncomfortably stoned as I did), including a glorious cameo from Ben Stiller as his evil orderly from Happy Gilmore.

"You could trouble me for a warm glass of shut the hell up!"

Adam Sandler's 'Hubie Halloween' is now on Netflix and Ben Stiller pops up as a familiar face: the evil orderly in 'Happy Gilmore' 😂 pic.twitter.com/WWqHg4pqBA

That’s not the only reference to Ghosts of Sandler Past, as a gang of bullying kids also shout out “O’Doyle rules!” as they terrorize they easily-frightened Hubie Dubois (in case you couldn’t already tell, this movie is absolutely preposterous).