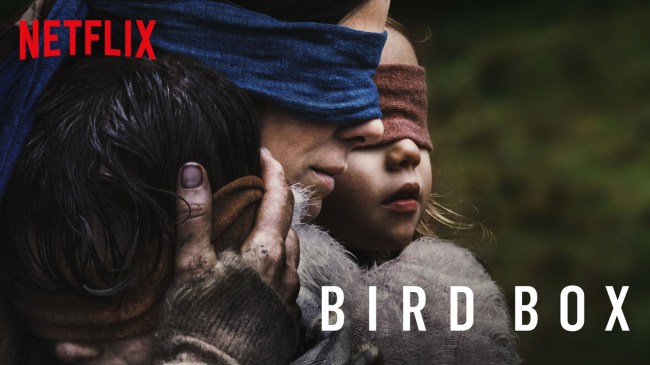 So, have you watched Netflix’s latest hit Bird Box starring Sandra Bullock? Based on some reports a big chunk of you reading this have indeed watched it.

I watched it because I am a sheep and it was an entertaining couple of hours. It’s certainly not the greatest film I have ever seen, but it was decent. Not sure why people call it the “scariest” movie they’ve ever seen. Maybe it’s because the film might be a metaphor for social media. Spooky…

That’s as good a guess as anything else I have seen, because after watching the movie, my only real thought was, “What exactly are the things that have caused the apocalypse?” It would have been nice for someone at some point to have explained that, no?

Anyhoo, that’s not why we’re here today. We’re here today because as is often the case with any short-lived cultural phenomomen, Bird Box and the plot surrounding it have been turned into some glorious memes.

We’ve also been rewarded with several Sandra Bullock is “the lady from Bird Box” tweets.

The lady from bird box looks like MJ 😭 pic.twitter.com/ijBCBvsf0c

Lmfao this how the lady in “Bird Box” looked like dragging those kids through the woods 😂 https://t.co/fiKdB3TxRN

some people: that lady in bird box is…

Naturally, there were many, MANY of your run-of-the-mill totally relatable slash comedic Bird Box memes.

Going on social media trying to not see whose thirst traps my exes have liked pic.twitter.com/g2ylahw88N

can someone help me i just watched the wrong birdbox pic.twitter.com/PoqBk4kHfr

*Me next time I hear the wind picking up and the birds chirping crazy* #BirdBoxNetflix pic.twitter.com/oH4W6czdmx

Olympia opening every stranger that knocks on their door#BirdBoxNetflix #BirdBox
pic.twitter.com/f2V1PU4nJG

YALL REALLY THINK I’M BOUT TO LOOK OUTSIDE WHEN THERE ARE BIRDS CHIRPING BY MY WINDOW. #BirdBoxNetflix pic.twitter.com/3Tef3iuWlM

The blind people in #BirdBox while everyone else is dying:

Me: Look at all these #BirdBox memes pic.twitter.com/abMKHnfyRI

And, of course, it wouldn’t be the internet if there weren’t a #BirdBoxChallenge.

my family and i wanted to see how well we’d do if we were in the bird box movie 💀😂 #birdboxchallenge pic.twitter.com/da3d0KWTkO

Can’t believe I have to say this, but: PLEASE DO NOT HURT YOURSELVES WITH THIS BIRD BOX CHALLENGE. We don’t know how this started, and we appreciate the love, but Boy and Girl have just one wish for 2019 and it is that you not end up in the hospital due to memes.