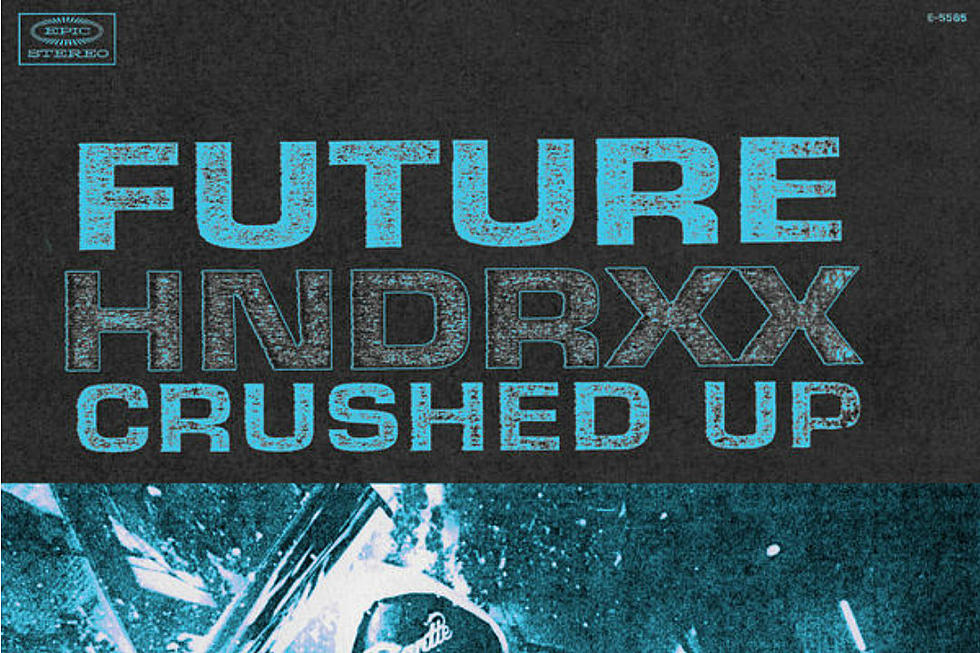 Welcome to the BroBible New Music Round-Up, where we see what new music has been released this week and are committed to keeping our Christmas lights up until at least the end of January regardless of what the neighbors think. For updates, follow me on Twitter for more:  @ryanoconnell79

Every time I think of Future, I am amazed that his name is Future. How had that moniker not been taken already? I mean, you could think the same thing about The Band, but that was the sixties and things were all sorts of weird back then. Future broke through around 2010 and somehow was able to keep the name Future, which was a shortened version of his nickname in the Atlanta-based crew, Dungeon Family, that he came up in. I don’t know. I guess it’s just one of those things that will always amaze me.

Either way, “Crushed Up” is technically the second new song Future has released this week, but it’s currently the only song you can find out there. On New Year’s Eve he dropped “NASA” with French Montana, but it quickly vanished. Future did just have his fifth child, so maybe like most new parents he was a little sleep deprived and hit something by accident, thus erasing “NASA” from existence. It’s just a theory.

“Crushed Up” is our first new dose of Future since his late 2018 collaboration with Juice WRLD WRLD On Drugs.

Unless you’ve been living under a rock for the past few months, you’re at the very least mildly aware of the video game Red Dead Redemption 2. It was kind of a big deal. It also takes nearly thirty hours to complete. One of the artists who appeared on the game’s soundtrack was D’Angelo and now “Unshaken” has finally been officially released. It’s D’Angelo’s first new music since his excellent 2014 album Black Messiah.

Other artists contributing to the soundtrack are Willie Nelson, Nas and Josh Homme of Queens of the Stone Age. The score features contributions from Daniel Lanois and Queens of the Stone Age drummer Jon Theodore, among others. In an interview with Rolling Stone back in December, Ivan Pavlovich, Director of Music and Audio at Rockstar Games talked about the soundtrack, saying they were looking for “real musicians who were left behind.”

No word on whether or not the rest of the soundtrack will be released.

Noname, a Chicago-based rapper and spoken-word artist, first came into our lives via guest spots on Chance the Rapper’s Acid Rap and Coloring Book. But she stole our hearts with her 2018 album Room 25, which featured “Self,” one of our favorite tunes of the year. Noname’s flow is both soft and delicate and confident and smooth, backed by some vintage soul-dripping jazz back beats that calls to mind early A Tribe Called Quest.

“Song 31” is her first new release since Room 25. It’s head-bobbing, thought-provoking goodness; a welcome break from the bombastic largess of much featured in most hip hop these days.

Grizfolk are a gang of dudes from Sweden and Florida, based currently in Los Angeles, who made noise with their 2016 album Waking Up The Giants, which featured the song “Bob Marley.” At the end of December, the band tweeted out that Grizfolk 2.0 was coming and presumably, “Spoonful” is part of this next phase for the band. I am generally behind anything labeling itself 2.0, so let’s do this Grizfolk.

Bear Hands are back with “Blue Lips,” a collaboration with Ursula Rose. It’s one of two new tracks released by the indie/electro pop group, with the other being “Ignoring the Truth.” Bear Hands have been one of those bands whose name I’ve seen from time to time, either in Spotify playlists or on festival bills, and been intrigued by their name. Bear Hands. It’s a fun name. It kind of sounds like something that happens to you when you’re drunk; like my boy got bear hands again last night. It was super awkward.

This Week’s Kind of Ridiculous Question

There’s a piece currently running on Tablet titled “What Kind of Person Pays to See the Band Phish 150 times?” I didn’t read it because to me, the answer seems pretty straight forward: a fan. More specifically, a really big fan. You want to get more specific? I’d say a really big fan with either some pretty quality financial backing or damn near admirable ingenuity.

I Guarantee That This Song Will Get Stuck in Your Head

Over Christmas break,  My Darling Wife and daughter went to see Mary Poppins Returns. I caulked the tub. We all make our choices. Either way, since that fateful day I have more than lost track of the number of times that we have listened to the movie’s soundtrack. One song in particular leads the pack in times played: “Turning Turtle,” song by Meryl Streep BECAUSE MERYL CAN DO ANYTHING, INCLUDING SINGING IN WHAT I ASSUME IS A RUSSIAN ACCENT.

Here is my challenge to you: listen to this song once all the way through. If it’s not stuck in your head for the rest of the day, I’ll caulk your tub next.