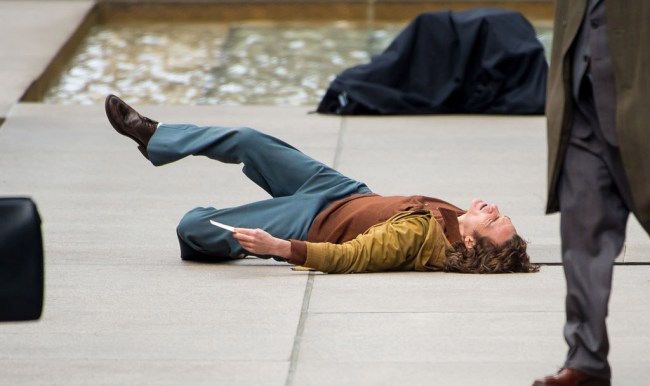 Last week we got a REALLY good look at Joaquin Phoenix in one of his Joker outfits while filming in Newark. The videos and pics showed Phoenix in a full-blown clown costume.

Prior to that we saw him looking like a like a mashup of Heath Ledger, Cesar Romero and Jack Nicholson’s version of The Clown Prince of Crime.

And now, we get another look, and a much better one, of Joaquin Phoenix in his civilian clothes as Arthur Fleck as he gives chase after someone before wiping out hard on the sidewalk.

I wonder if this is what actors mean when they say they do “most” of their own stunts?

Also, over the weekend, the first look at Brett Cullen as Thomas Wayne (Bruce’s dad) hit the web. In the film, Wayne is reportedly running for mayor of Gotham.

1st look at Brett Cullen as Thomas Wayne from The Joker movie. pic.twitter.com/Dfvzn8DzHl

Check out more new pics of Phoneix on the set of Joker below.

Joaquin Phoenix takes a break on set in between filming #Joker (October 2018) pic.twitter.com/KXxigiYV30

Joker is scheduled to be released on October 4, 2019