What Catastrophic Event Is 2020 Most Likely To Throw Our Way Next? Breaking Down The Odds Of How A Bad Year Could Get Even Worse 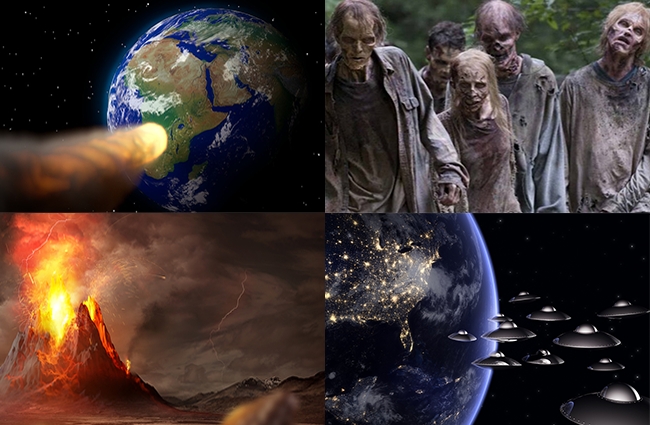 If you’ve been alive for the past eight months, you know all too well that 2020 has been a dumpster fire deposited into a flaming landfill located deep within the bowels of Hell, and if this is somehow the first thing you’ve encountered since coming out of a coma you fell into prior to January, you might want to ask your doctor if it’d be possible for them to induce another one.

We still have almost five months to go until we usher in a new year that would have to really think outside of the box to be a more miserable collection of 365 days than this current one, which means there’s plenty of time for things to get even worse before everything is said and done. So what could possibly come next? At this point, nothing is off the table, but if I was a betting man (which I am to a crippling degree), I’d be interested in some action on what the next catastrophe to strike the good people of Earth will be.

Sadly, I haven’t been able to find any bookmakers offering that kind of action so I figured I’d set my own odds for the horrible thing we’re most likely to be treated to next. 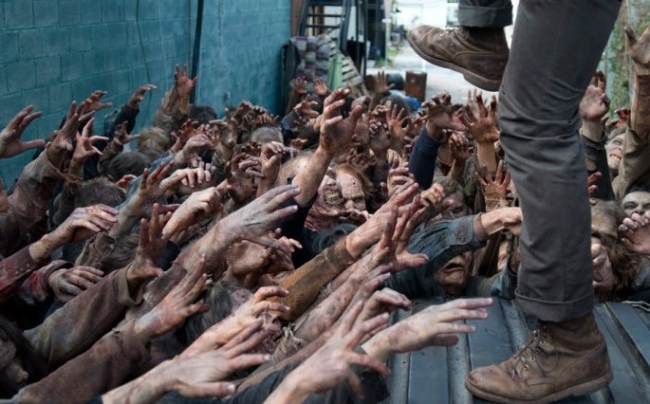 Everyone secretly hopes that a zombie apocalypse happens because we all like to think we’d be one of the survivors with bandoliers strapped around their shoulders with a machete in one hand and a machine gun in another as we mow down hordes of the undead.

In reality, most of us would be rocking back and forth on the floor sobbing hysterically in the fetal position while zombies devoured the loved ones we abandoned after immediately hauling ass upon encountering a horde for the first time but feel free to keep telling yourself that wouldn’t actually be the case.

I’m not seeing any movement in the direction of a zombie apocalypse and I feel like it’s something that doesn’t happen overnight. I figure there will be reports concerning an isolated situation that gradually spreads to other places over the course of a couple of months before suddenly spiraling out of control and you can be damn sure I’m stocking up on toilet paper this time around if I get the sense one’s about to unfold. 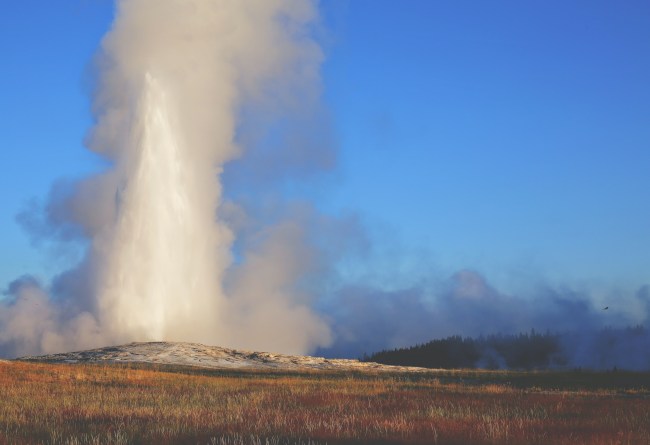 Geology nerds and Discovery Channel viewers alike know that beneath the breath-taking beauty of the bubbling hot springs and tourist-goring bison of America’s first national park lays a massive supervolcano waiting to erupt, which is just like a regular volcano only…more super.

Scientists have been monitoring the situation for a while, and a few years ago, they warned what has been described as “one of the planet’s biggest time bombs” could go off at any moment. Thankfully, that hasn’t happened yet, but if it did, it would destroy a huge chunk of all of the life on the planet.

There’s no indication Yellowstone is on the verge of blowing its top but it’s certainly not something you want to count out entirely. With that said—and this could just be my inner optimist speaking—I don’t see this happening before 2021 rolls around. 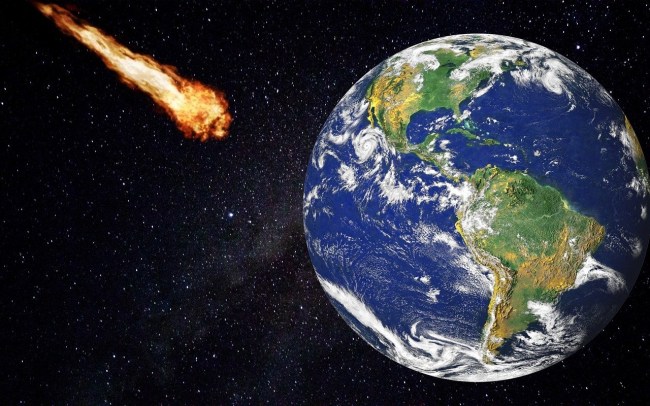 It seems like I come across a story about an asteroid “narrowly” avoiding a collision with Earth every month only to read it and be reminded that astronomers describe every incident where a large space rock comes within a few hundred thousand miles of the planet a “close call.”

Scientists are currently tracking a couple of sizeable objects scheduled to visit our area of the solar system at the end of the decade but neither of them seems to pose a direct threat based on their current trajectory or are even close to the estimated size of the one that fucked up the dinosaurs’ shit over 65 million years ago.

The most terrifying aspect of history repeating itself is knowing that we could see our fate coming from millions of miles away but would basically be powerless to do anything about it, as there’s currently no way to just move the Earth a little to the left at the last second while it waves a red cape to the side like some sort of cosmic matador.

I suppose we could try to nuke it (or perhaps recruit a team of oil drillers to become astronauts and embed an atomic bomb within its core) but A) I’m not a scientist and B) I’m guilty of pitching that idea for just about any problem, whether it’s stopping hurricanes or cleaning the gutters.

As I mentioned, the people tasked with tracking these things don’t seem to think there’s any imminent danger but they also have a history of not realizing an asteroid pulled a Maverick and buzzed the planet until after it happened. However, that’s usually because they’re on the smaller side, so while I’m not ruling out an extinction-level event thanks in no small part to the precedent that was set during the Cretaceous Period, we have some other things we should worry about a bit more. 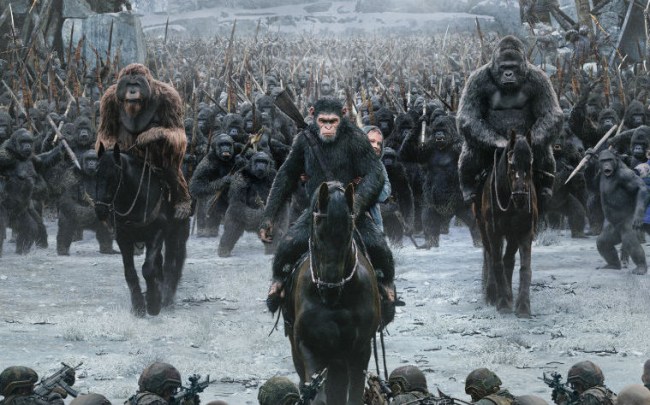 I’m a big fan of the Planet of the Apes movies—no, films—and both the originals and the modern installments really do it for me. I view them as some of the most important and relevant works of speculative fiction since anything that can be described as “Orwellian”.

If you’re not super familiar with the franchise, you should know that the timeline concerning the simian revolution that unfolds means there’s still a chance it could occur in real life and we’re actually seeing certain developments that could bring it to fruition unfolding before our very eyes.

While the original films used a somewhat confusing timeline that involved time travel and time paradoxes (the fourth and fifth movies were somehow both simultaneously prequels and sequels to the first three), the new ones have an arc explaining how the apes seized power that almost has a “ripped from the headlines” vibe.

It started with human scientists in search of a cure for Alzheimer’s doing genetic experiments on apes, which caused some of their test subjects to develop high levels of intelligence (which they could’ve seen coming if they’d watched Deep Blue Sea) before rallying their fellow primates to attack the humans who had wronged them.

Here’s where it gets eerily similar to our current situation: the apes get an assist from a new ultra-contagious virus that wipes out huge swaths of the human population. Sound familiar?

I see apes exhibiting anti-human sentiment all the time. Recently, “pranksters” gave a troop of baboons at a safari park in the United Kingdom knives, screwdrivers, and even chainsaws that they subsequently used to carry out coordinated attacks on cars. They may not have acquired those weapons on their own, but I still don’t like how apes—who previously spent millennia using rocks, sticks, and their own feces as their primary weapons—now understand how to use power tools.

I think this is the one to bet on. It’s not the favorite, but it’s up there, and there would be a nice payout at the end (if payouts still exist and money even matters at that point). 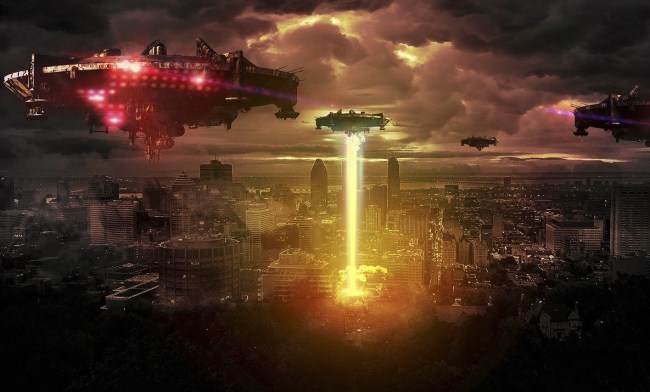 If I had made a list like this a year ago, there’s no chance that aliens would be the runaway favorite, but 2020 is the year where you now not only expect the unexpected but aren’t even remotely surprised by it.

Earlier this year, the United States government released multiple videos of unidentified flying objects that it has no explanation for. By no means is this proof that aliens exist but it was a big pivot away from the “It’s a weather balloon” excuse officials were once so fond of. If they’re willing to admit that, who knows what else they aren’t telling us? For all we know, they’re just trying to soften the blow when they admit an alien invasion is imminent. It’s like when parents buy their kids ice cream before telling them they’re getting divorced, only we’ll have to process the end of the world as opposed to a marriage.

Plus, the announcements keep coming, and while they would’ve previously dominated the news cycle, they’ve been relegated to a brief stay on the Trending tab on Twitter before being largely forgotten about, which leads me to believe that more announcements of the sort could be on the way.

Now, let’s put ourselves in the bulbous heads of the aliens. Once you realize your cover has been blown, why not reveal yourselves and make a splash? Of course, aliens showing up wouldn’t necessarily be catastrophic. Maybe they’d wind up being some of those Cool Aliens that were just abducting people because they wanted to gain insight into the mysterious inner workings of the human rectum?

Whatever their intentions, aliens are still the runaway favorite to make 2020 even more 2020ish.