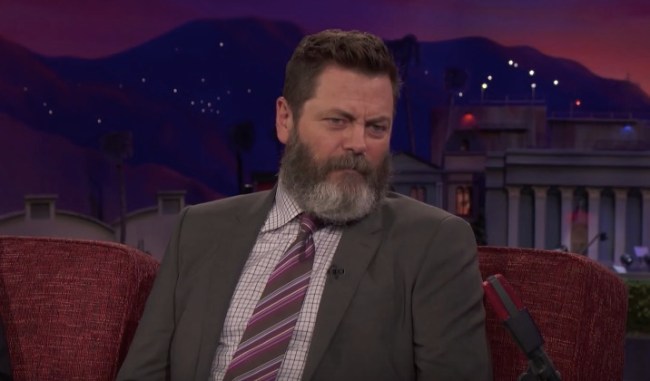 As I was laying in bed last night flipping through the channels I stopped on Conan when I saw Nick Offerman walking out from backstage. I’m a simple man, if I see Nick Offerman on TV I stop and watch, and I’m glad I did because as is the case with every Nick Offerman interview last night’s was pretty spectacular.

Nick Offerman is Ron Swanson in real life. We all know this by now. He’s got a wood shop in his backyard in Hollywood stocked with rare woods from all around the world. He casually speaks like some sort of 17th-century Irish poet. He’s a man’s man and I think that’s something that Parks and Recreation co-creator Michael Schur wanted to preserve when he first cast Nick as Ron Swanson.

Speaking with Conan last night, Offerman talked about how the show’s co-creator asked him and Chris Pratt to essentially stay fat/never lose weight. He explained that the first thing a lot of actors do when they land a major role is to hit the gym and slim up but he wanted Nick and Chris looking like they were from Indiana:

If I’m from Indiana, the fact that the director wanted these two actors constantly eating fatty meat to gain weight and be ‘husky’ is slightly offensive, but sometimes the truth hurts. Also, it has to be fucking amazing to be Nick Offerman and be at a steakhouse and have people sending you over thick-cut bacon and porterhouses. Sending over drinks is overrated anyways.