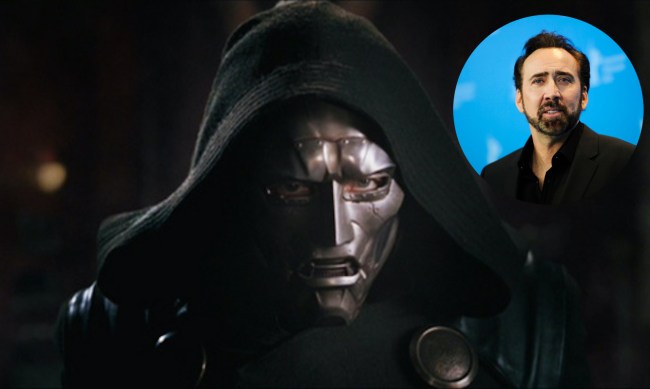 Nicolas Cage, man. You know, over the weekend, I saw Con-Air for the first time. I know, I know, it’s sacrilegious, especially for someone like myself who parades themselves around as a “movie guy”. Don’t get me wrong, I’d “seen” Con-Air before — an hour here and there on cable TV throughout the years — but I’d never properly sat down, rented it, and watched from start to finish (you know those sort of movies: Indepdence Day, Titanic, Goodfellas, etc — they’re on cable all the time so you’re always catching them in pieces).

And what a glorious film Con Air is. If we were submitting movies to a museum that encapsulated what life, and Hollywood, was like in the late 1990s, Con-Air would be it.

Fun fact about Con-Air is that it happened during the peak of Cage’s career: from 1995 to 1997, Cage rattled off a run of films that included Leaving Las Vegas (for which he won an ACADEMY AWARD FOR BEST ACTOR, bet you didn’t know that), The Rock (arguably the GOAT 90s action movie), Con Air, and Face/Off. In the twenty-plus years since Cage has become something of a caricature of himself, but it’s important to remember that there was once a time where this dude was the man.

There was also, apparently, a time where Cage was set to Doctor Doom in that original Fantastic Four franchise, which is one of those sliding glass door moments that you wish went the other way (Doom was instead played by an actor named Julian McMahon). This missed opportunity ranks right up there with the most legendary near-miss of Cage’s career: that time he almost played Superman in a totally gonzo Tim Burton adaptation.

RELATED: Is Nicolas Cage Starring As Superman Now Back On The Table?

Ryan Unicomb, the Australian filmmaker behind the upcoming Justice League: Mortal documentary, managed to get his hands on some makeup work and concept art of what Cage’s character could look like. According to the filmmaker, Cage’s appearance as the character skirted the line of almost being too dark as it begged for an R-rating at the time.

“Back before Julian McMahon took over the role, Nicholas Cage had been cast as DOCTOR DOOM for 2005’s FANTASTIC 4,” Unicomb wrote in his Instagram. “The production team decided to approach Cage after a concept artist used the likeness of singer Marilyn Manson for some of their pieces. At the time, the project was considerably darker & Doom’s look was definitely walking a line between PG13 & R (as seen in these production maquette’s of his skinless, bio-metal arms). This obviously never panned out but it’s interesting nonetheless.” [via ComicBook]

While the Doctor Doom ship has unfortunately sailed, the possibility of seeing Cage as Superman is now more alive than it’s ever been thanks to the upcoming introduction of the multiverse in the DCEU. With both Michael Keaton and Ben Affleck set to appear as Batman, I see no reason why Warner Bros. wouldn’t fully embrace the chaos and toss in a Cage-as-Supes cameo for good measure. Who wouldn’t want to see that?