Is Nicolas Cage Starring As Superman Now Back On The Table? 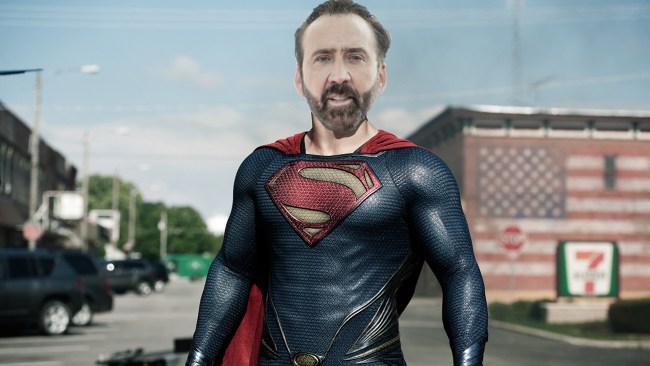 You’re going to have to just bear with me on this one. You know how when you watch movies or television you’re supposed to simply suspend disbelief for the sake of enjoyment? Can a pre-teen actually escape from a government laboratory and flip an at-full-speed sketchy van over her head mid-bike ride? Of course not! Does that make Stranger Things any less dank? Exactly. Ital 1 – Reader 0.

Now that you’ve wrapped your head around the fact you must simply accept the preposterousness of everything that’s to follow, back to the Nicolas Cage potentially starring as Superman, which is something you may or may not have heard by now.

Back in the late ’90s, Cage was attached to a TIM BURTON-helmed take on the Man of Steel titled Superman Lives. The project got to such a point that Cage even screen-tested in a suit, resulting in now-infamous images that essentially summarize life in the 90s.

The project, thankfully, never came to be — the Superman character remained dormant until 2006’s Superman Returns, while Cage went on to do, well… whatever it is that Nicolas Cage does these days. As far as potential film castings go, this one was destined to forever remain a bizarre what-if.

But then news broke earlier this week that Michael Keaton was in talks to return to the role of Batman that made him and the Dark Knight superstars back in 1989. In an effort to introduce audiences to the idea of the multiverse, reports indicate that Keaton will co-star in 2022’s The Flash.

As the story goes, the Flash — using his speed to travel back in time — ends up entering an alternate reality with an alternate version of Batman. In the comics, its Thomas Wayne, the father of Bruce who takes up crimefighting after his son is murdered in a botched robbery, but in the film, it’s going to be Keaton’s Batman. Capisce?

This leads us to my *rips bong* theory: does this mean Cage can now appear as some sort of bizarre Superman? Given that Burton was set to helm Superman Lives, it’s theoretically possible that the film would have existed in the same universe as Batman and Batman Returns.  There’s also the question of who else could fill the role of alternate universe Superman if the DCEU wanted to work him into a cameo in The Flash. For multiple reasons, Henry Cavill is obviously off the table for this sort of role, as he’s still in the main universe Superman at this point. There’s Brandon Routh, who played the Man of Tomorrow in 06’s Superman Returns. Routh’s career has gone nowhere since — except for a hilarious cameo in Zack and Miri Make a Porno — so a Superman cameo from him wouldn’t bring any element of excitement. Nic Cage, on the other hand? Imagine Nicolas fucking Cage poppin’ up in the red cape and tights? He’s a similar age to Keaton, so the relative age of the two characters would be reasonable enough.

If Warner Bros. is truly committed to the inherent ridiculousness of what a multiverse is, there’s no reason a 20-minute Nic Cage cameo in The Flash can’t be on the table. Audiences’ brains would explode on sight. It’s a bird! It’s a plane! No, wait… it’s Nicolas Cage!

RELATED: The Existence Of Michael Keaton’s Batman In The DCEU Was Already Teased Earlier This Year