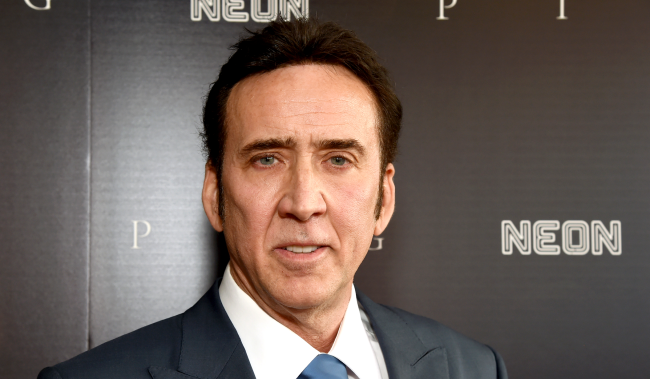 Nicolas Cage, the man, the myth, the legend, says he plans on acting until he drops dead.

It appears, according to newly released video, that Cage took a few steps towards that inevitable moment while visiting a restaurant recently in Las Vegas.

The footage shows Cage inside Lawry’s Prime Rib on The Strip looking resplendent in a black t-shirt, leopard print pants and a pair of slides, which he took off, and later struggled to put back in on, while inside the eatery.

According to The Sun, an eyewitness to the scene reported that staff at Lawry’s at first thought Nicolas Cage was a drunk homeless person.

They later learned who it really was and that the reason for Cage’s inebriated state was because he had been at the bar drinking expensive whiskey and shots of tequila.

“We were at that bar at Lawry’s when we noticed what we at first thought was a homeless man completely drunk and being rowdy,” a witness told The Sun. “To our shock it turned to be Nicolas Cage. He was completely smashed and was getting into a bit of a fight with the staff.

“He was in a really bad state and was walking around shoeless. Staff told us he had been downing shots of tequila and 1980 Macallan whiskey.

“He was shouting at people and trying to get into fights and then staff asked him to leave. He was so drunk he could barely get his flip flops on before being escorted out.

“He asked us if we wanted to come back to his place, but he was in a bad way so we didn’t think it was a good idea.

“One of the regulars ended up taking him home.”

Nicolas Cage will soon star in the upcoming film The Unbearable Weight of Massive Talent playing… himself. Can’t wait.