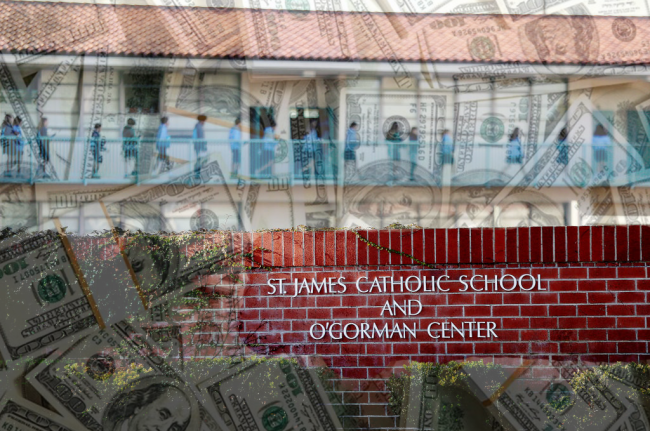 Mary Margaret Kreuper was so close to getting away with it. The 79-year-old former nun pleaded guilty to federal charges for stealing more than $800,000 from St. James Catholic School earlier this month. The embezzlement helped to fuel her gambling habit.

Sister Mary Margaret became a nun when she turned 18 in 1960 and took a vow of poverty. The vow leads a nun to imitate Jesus, who “for our sake became poor,” although he was rich. She must give up the right to control or benefit from personal property and commits herself to live interdependently within a community.

Well, Sister Mary Margaret didn’t quite stay true to her vow. She really didn’t stay true to it at all, actually.

Earlier in June, the former principal of St. James School was charged with wire fraud and money laundering. The now-retired nun (I didn’t know nuns could retire) admitted to stealing about $835,000 in donations, tuition and fees.

In her plea agreement, Sister Mary Margaret confirmed that the stolen money was used for credit card charges and “large gambling expenses incurred at casinos.” the U.S. attorney’s office said.

This large chunk of stolen money came as the St. James Catholic School was operating under tight budgets with small concerns that the finances could not continue to keep the door open.

She faces up to 40 years in federal prison, but is claiming mental illness.

Sister Mary Margaret’s lawyers said that she is “very remorseful,” and “has been suffering from a mental illness that clouded her judgement and caused her to do something that she otherwise would not have done.”

Of course, at 79, the likelihood that Sister Mary Margaret will see any jail time is relatively slim. Claiming mental illness at her age is a play for probation or the ability to serve her sentence at home.

When this was going on, she was not nearly as old. Her embezzlement activities took place from about 2008-2018. At least, that’s where they caught her.

By that math, Sister Mary Margaret was only 66 when the behavior began. 66 is still a fairly competent age.

Sister Mary Margaret was caught in 2018. She was the principal and had been colluding with longtime teacher Sister Lana Chang on the operation, per the Daily Breeze. The two would skim money off of the top through separate school bank accounts and then head out to Vegas and put it into the casinos.

Apparently, the Vegas trips were common knowledge, but the nuns explained that the gambling excursions were gifts from a rich uncle.

“These nuns took a vow of poverty and said, ‘oh no, we’ve got a rich uncle,” one parent told the Press-Telegram. “The rich uncle was the parents of the St. James students.”

I, for one, absolutely love this move. Sister Mary Margaret was making bank (very illegally) through laundering and threw everyone off of the scent by reminding them of her vow of poverty. While claiming to live financially destitute like Jesus Christ is probably blasphemous, using the old “I’m poor, but my uncle is rich” line and getting away with it speaks to Sister Mary Margaret’s impressive poker face.

Maybe if she had used her poker face to see more success in Vegas, she wouldn’t have been in this position to begin with.

She would have got away with it if it weren’t for those meddling parents.

Sister Mary Margaret and Sister Lana were in the clear. The two announced their retirement at the same time and were on their way out in 2018. All they needed to do was get through the school year.

However, around the same time, a family at the school asked for an old check they had written to St. James. When staff members finally found the check, they realized that it was not deposited in a St. James account, but a different bank account.

That was the first clue that unraveled a significant scheme. An old unused bank account was the giveaway. The account was opened in 1997 but had not been used in years, until Sister Mary Margaret started diverting checks into the forgotten account.

She would endorse the checks with a stamp saying “St. James Convent,” not “St. James School,” before tapping the funds for personal use.

Sister Mary Margaret and Sister Lana were both Sisters of St. Joseph of Carondelet. When the fraudulent behavior first came to light, the order was deeply disappointed and offered to repay the lost funds— only believed to be $500,000 at the time.

Because the funds were to be restored, the archdiocese decided not to press criminal charges.

After much public outcry to pursue legal action, the archdiocese hired a former FBI agent to investigate the two nuns. His findings unraveled the entire scheme and, eventually, federal charges were levied against Sister Mary Margaret.

Now, nearly three years later, she faces up to 40 years in prison and will appear in the Federal District Court in Los Angeles on July 1.