Guy Proposes In Times Square And Drops The Ring Down A Sidewalk Grate, NYPD Then Tracks Him Down 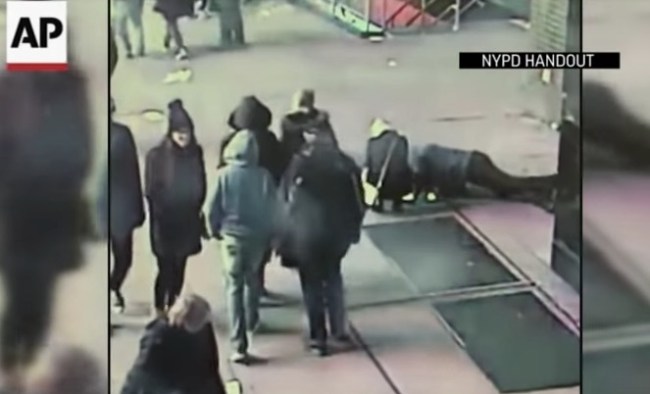 A couple visiting NYC went viral after a camera captured the man proposing to his girlfriend in Times Square (she said yes) before dropping the engagement down a sidewalk grate. The NYPD began circulating the footage (short clip below) of the man dropping the ring in an effort to track the couple down and get them the ring. Over the weekend, they found the couple and got them the ring.

The sidewalk grates in NYC are straight up nasty. Thousands of women get the heels of their shoes stuck in them daily and fall. People walking their dogs teach the pups to shit inside of the grates so they don’t have as much to clean up if any of it falls through. The grates are basically massive ashtrays for people dropping cigarettes down there.

The NYPD’s camera picked up the man proposing and dropping the ring. The clip’s super short but you can see the panic on his face. It happened around midnight and the NYPD opened the grate but wasn’t able to find it initially because it was so dark. Officers then came back at daylight and were able to find it.

“Fortunately, it was actually kind of sitting on top of all of that stuff, so it really wasn’t hard to find. It was just a small object like that in the midst of all the garbage,” said Det. Joseph Bucchignano, the officer who spotted the ring.
In an effort to identify the anonymous couple, the NYPD put out a video message on social media showing them searching for the ring before police had arrived. Drennan is seen on his stomach peering through the grate. (via AP)

They (NYPD) shared a picture of the ring with a tip line phone number asking for anyone who could help them track down the couple.

Here’s a photo of the ring our officers recovered (and cleaned!) Call 1-800-577-TIPS or DM @NYPDTips if you know the happy couple so we can return it to them! pic.twitter.com/hzFXxuMVJW

Lesson learned: Never purpose right in the middle of a grate

The NYPD eventually found the happy couple and returned the ring. The couple shared a picture of the woman wearing the ring after making it back to their home country and celebrating.

Found ‘em! Well done Twitterverse.
The relieved couple is back in their home country now, but @NYPDnews will be sure to get the ring to them quickly … and safely. Happy holidays, everyone.

I can’t even imagine the terror of proposing and THEN dropping the ring down one of those grates. Thankfully, the ring was returned (and cleaned, I’m sure). So they’ve got a pretty great story out of this.