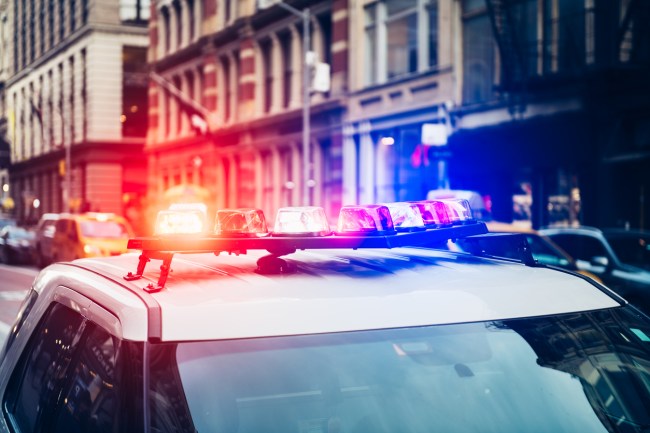 The t-shirt cannon, a beloved weapon that utilizes air pressure to launch joy and t-shirts to people everywhere. Air pressure guns have been used by Adam DeMamp, Dwight Schrute, The Trailer Park Boys, the Toronto Raptors dinosaur mascot, and Mr. Met, who was actually sued by a New York Mets fan who claimed was knocked unconscious at Citi Field from being hit by a flying t-shirt. Everyone loves t-shirt cannons with the exception of the Mets fan who knocked out, the University of Colorado mascot Chip the Buffalo who accidentally got his gonads smashed by the recoil of a malfunctioning t-shirt cannon) and now the New York Police Department.

The NYPD pulled over a military green-colored Hummer along 9th Avenue near West 34th Street in Manhattan Saturday afternoon, according to the New York Post. Christopher Stoney, the driver of the Hummer, had committed no driving infractions but police were concerned about the “scary-looking” gun on the top of the truck.

However, after closer inspection, the cops realized that it was an air rifle that fires t-shirts. Stoney, who is a rapper originally from Philadelphia named Warchyld, uses the roof-mounted air rifle on the vehicle to launch t-shirts at promotional events. Stoney has had the decked-out Hummer with the t-shirt cannon since the summer of 2019.

Despite the t-shirt gun obviously being used by the hip-hop artist for promotional reasons and clearly not a threat, the NYPD confiscated the device and ticketed Stoney with a violation for unlawful possession of an air rifle.

“I’m sorry to say but the NYPD is about to confiscate my cannon off my truck,” the rapper said. “This sh*t is crazy right now, man. They’re taking it.”

What if the NYPD doesn’t hate t-shirt cannons at all? What if the NYPD just needed an excuse to get their hands on a badass air pressure cannon and they’re firing crap out of the t-shirt gun right now?

Nobody tell the NYPD about the t-shirt Gatling gun.