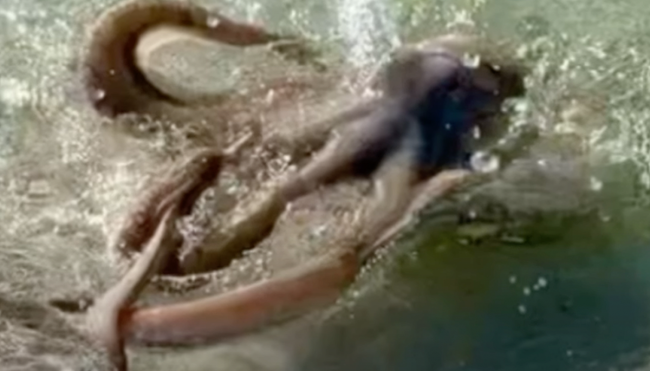 Australia is a gorgeous country filled with some incredible natural wonders, whether you’re talking about the sprawling expanse of the Outback, the pristine beaches that dot its more than 16,000 miles of coastline, and whatever is left of the Great Barrier Reef at this point—all of which are filled to the brim with animals capable of making your life miserable in a wide variety of ways.

If you’re hanging out on dry land, you need to keep your head out on a swivel for baby-eating dingos and snakes and spiders sporting venom that will make your life very miserable (assuming it doesn’t come to an almost immediate end.) Unfortunately, the waters of Australia aren’t much safer, as you’ll have to take great care to avoid the deadly stonefish lurking below the ocean and the box jellyfish who spend their days floating around just waiting to screw someone’s day up.

There is also a wide range of octopi who call the ocean surrounding the country their home, including the famously lethal blue-ringed variety that can be found hanging out in tidepools and other places where they’re just begging to be stepped on.

Australian geologist Lance Karlson was lucky enough to avoid that particular species of octopus when he headed to Geographe Bay with his daughter last month, but he did encounter another that was apparently not thrilled it was being filmed without its consent based on an oddly terrifying video he captured of the animal leaping out of the water and lashing at him with its tentacles.

While the octopus swam away, Karlson told CNN that was only the beginning, as he was swimming when he felt something repeatedly whip his arm, back, and neck before turning around to see something fleeing in a cloud of ink. It didn’t take long before the imprint of a tentacle appeared where he was struck following an unpleasant sensation that went away when his wife pour some Coke on the affected areas after he got back to their hotel room.

While the “common octopus” the animal was later identified as is venomous, it’s not enough to pose any serious danger to humans. However, it still managed to leave an impressive mark that Karlson showed off.

Lance Karlson says he was looking at the shells when an octopus attacked him, whipping him on the arm and the back of his neck. This is the result! Ouch! https://t.co/zlEaTt75nX#KHOU11 #HTownRush pic.twitter.com/nwAl5ZHc6V