VIDEO: An Octopus Had A Bald Eagle In A Watery Death Grip But Survived Thanks To Salmon Farmers 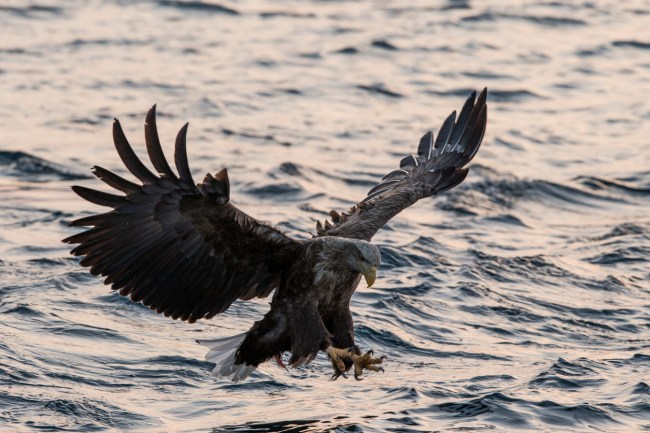 Stop me if you’ve heard this one before, a bald eagle was fighting an octopus. In what sounds like some wacky Syfy movie actually happened in real life. A bald eagle and an octopus got into a confrontation, and the distinguished bird was on the losing end of the animal donnybrook until some humans intervened.

We take you to Vancouver Island in Canada, where nature was doing what nature does, two creatures battling it out to the death. But luckily for the bald eagle, he got some much-needed assistance from salmon farmers.

A team of salmon farmers noticed that a bald eagle was splashing around in the water, but it wasn’t enjoying a refreshing ice bath, it was fighting for its life. An octopus had the full-grown eagle in a death grip and was trying to drown it on Monday.

“A full-sized eagle submerged in the water with a big giant octopus in the water trying to drag it down,” said salmon farmer John Ilett.

The salmon farmers watched the rowdy rumpus for about five minutes, many wondering if they should intervene or let nature take its course. But more importantly, how exactly does an octopus catch a bald eagle? And how bad of an eagle is this that it gets snagged by an octopus in Canada?

“We weren’t sure if we should interfere because it is mother nature, survival of the fittest,” Ilett said. “But it was heart-wrenching — to see this octopus was trying to drown this eagle.”

The team decided that they had to help the noble eagle. Ilett used a pole with a hook to pry the octopus and its tentacles from the drowning eagle.

“I was able to just latch on to the octopus and give it a little tug,” Ilett told CNN. “It released its grip… which gave the eagle just enough time to get to shore.
“We weren’t sure exactly how it was going to go down when I tested the pole.”

How pissed was the octopus to have its lunch stolen right in front of it? That octopus was going to enjoy eagle sandwiches and talon soup for days.

Ilett, who has been working on the water for 20 years, said this was one of the most incredible things he’s ever seen. “It’s moments like this why I love my job and being out in the environment where I can work and live,” he said. “It’s just amazing.” Fact: Nature is metal.

The footage of the octopus-eagle fight went viral online, and of course some people were angry at the salmon farmers for rescuing the eagle and not allowing the circle of life to happen (*cue the Lion King music*).

“Am I at fault because I’m human, and I felt compassion for the bird?” Ilett responded to the criticism. “At the end of the day, both animals are alive and well, and they went their separate ways, and we feel pretty good about what we did.”

Bald eagles were removed from the US endangered species list in 2007, but they remain protected under the Bald and Golden Eagle Protection Act, the Migratory Bird Treaty Act and the Lacey Act. Just don’t tell the octopi that.

This finally answers the much-debated question of Who would win a fight between an octopus and a bald eagle?