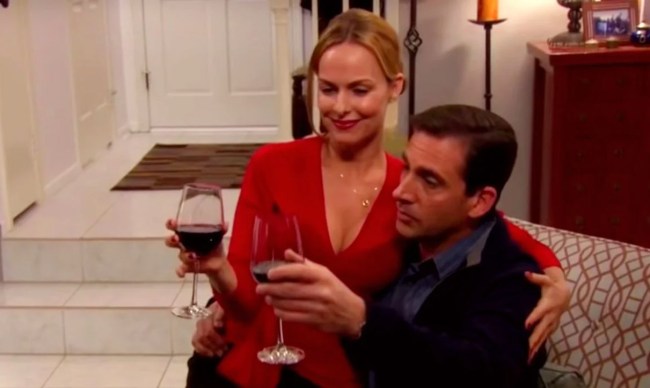 When I watched episode 13 of the fourth season of The Office titled “Dinner Party” I thought that it was entirely possible that the situation comedy had reached its zenith.

The “Dinner Party” episode was arguably the most cringe-inducing moments ever packed into one 30-minute episode of any show, ever. And I love every freaking minute of it.

As you may recall, the episode centered around Jim and Pam, after managing to avoid it nine times previous, finally getting roped into attending a dinner party at Michael’s condominium which he was sharing with his girlfriend/former boss Jan Levinson.

During the episode we get a tour of Michael’s home which now consists of a room dedicated to Jan’s home candle-making business, a small bench in the bedroom on which Michael now sleeps, and Michael showing off his teeny tiny “plasma TV.”

As the night progresses, Jan confronts Pam about previously dating Michael (she didn’t), Michael tries to talk Jim and Andy Bernard, who was also invited along with Angela, to invest $10,000 in Jan’s candle business, that Michael had three vasectomies at Jan’s request, Jan swooning over a song by her former assistant, and ends with the police being called after Jan smashes Michael’s little TV with a Dundie Award.

It really doesn’t get a whole lot better than that when it comes to sitcoms.

However, as the director of the episode, Paul Feig, revealed recently, the “Dinner Party” episode was “universally hated” by fans after it first aired.

“When this episode first aired, it was universally hated,” Feig told Entertainment Weekly. “But I remember, we were all celebrating, we were really happy with the episode. We were all kind of like, ‘Oooh, we can’t wait to show this, the response on our message boards is gonna be so great, the fans are gonna love it.’ and just this vitriol came up and it was like, “Oh no” we made people so cringey-feeling that they just couldn’t take it.

“What’s happened now is, once you’ve seen it once, and you get through, you know what’s coming, then you can really enjoy it. It’s another interesting lesson. It’s the same thing we suffered with on Freaks and Geeks. A lot of people just thought the show was too, it made them too uncomfortable when they were watching it for the first time.”

The “Dinner Party” episode of The Office was so amazing, in fact, that in 2018 Rolling Stone wrote an article calling it “the greatest Office episode ever” and getting Feig as well as cast members John Krasinski, Jenna Fischer, Melora Hardin, Angela Kinsey, Ed Helms and the executive producer and writers of the episode together to talk, in-depth about the episode.

One of the many highlights was Jenna Fischer saying, “Two years ago, I was shooting a movie, and when I walked into my trailer, there was a tiny flatscreen television mounted to the wall. It looked like a computer monitor, but someone had mounted it. It was exactly like in the show, so I took a picture of it and I sent it to the cast, to Ed and Angela and Rainn and Steve and Melora. And then we were all on this e-mail chain cracking up and remembering that episode together, because we were like, ‘Oh, my God, that’s the hardest I’ve ever laughed. My God, that’s amazing.'”