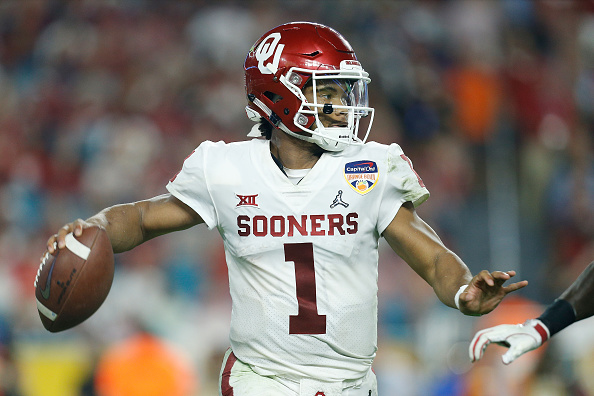 Last night, several top executives of the Oakland A’s met with Kyler Murray in an attempt to convince him to play baseball with them next season.

Top A’s executives, a marketing executive from MLB and others met Sunday afternoon with Murray in Dallas, sources told ESPN, to better understand what it would take for Murray to forgo a football career and to sell him on playing baseball full time. Murray is expected to declare for the NFL draft before Monday’s deadline, though doing so would not preclude him from agreeing to a new deal with the A’s.

Murray agreed to a minor league deal with a $4.66 million signing bonus after Oakland took him with the ninth pick in the 2018 draft. The A’s allowed him to return to the University of Oklahoma, where he put up historic numbers at quarterback and won the Heisman Trophy.

According to report by WFAA reporter Murray demanded $15 million from the As to play baseball next season or else he was going to enter the NFL draft.

According to a source close to the situation, Kyler Murray’s number is $15M.

He wants big time money to stick with baseball, otherwise he will enter the NFL draft tomorrow.

The A’s are doing everything they can, sending their top brass, led by Billy Beane, to meet with him.

It appears that the As passed on Murray’s ultimatum because today he declared for the NFL draft today.

Oklahoma QB Kyler Murray has submitted the paperwork to turn pro and plans to enter the NFL draft. Murray has informed the Oakland A’s of his intention to follow his heart to the NFL, where many project him to be a first-round pick.

Source: #Oklahoma QB and @Athletics draft pick Kyler Murray has submitted his name for early entry into the NFL Draft. This doesn’t lock him into football but does give him the option.

Murray’s final decision will probably come next month before Spring Training decisions have to be made.

Oklahoma QB Kyler Murray will enter the NFL Draft. He has informed the A’s of his decision. The next inflection point in figuring out whether he will decide football or baseball will come in February, when he has to decide whether to stay at spring training, or go to the combine.