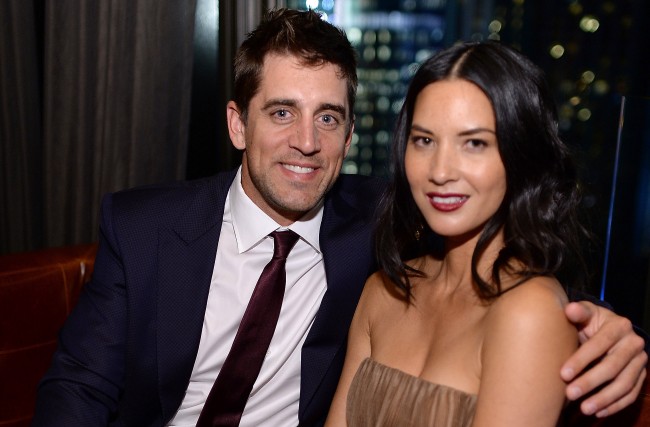 36-year-old Green Bay Packers quarterback Aaron Rodgers has had no trouble when it comes to landing talented and beautiful girlfriends over the years.

Since 2014, the Super Bowl XLV MVP has been in long-term relationships with both Danica Patrick and Olivia Munn.

His relationship with the latter must have ended rather poorly, however, because three years later Munn is still dropping veiled bombs that tend to land right at the feet of the two-time NFL Most Valuable Player.

A little over a year ago, Munn spoke about an unnamed former boyfriend leaving her feeling “worthless,” leading many to believe that she was talking about Rodgers.

Fast forward to this week and Munn did it again during a conversation she had with Whitney Cummings on her podcast.

“Swear to God I’m like I regret every time I have fake moaned because these guys are out there feeling so f**king confident,” Munn told Cummings. “I have this one, in particular, that was just the worst, the worst at just having sex. In fact, he went down on me twice during the years we were together and I asked him once and said why don’t you ever go down, but by the way, I don’t want you to.

“Um, but I’m just wondering why because I feel like most guys I can’t get out of my vagina and I’m like you have to fake it all the time.

“He said he’s like well I just haven’t had a lot of you know experience doing it and I was like, oh, and that’s when I was also like, um, he may like Benton (Cummings’ show producer) instead, you know? It might be his kind of game and stuff.

Based on an internet search, the men Munn has been in a relationship for “years” are Tucker Roberts, Joel Kinnaman, Bryan Greenberg, and Rodgers. So that narrows it down a little bit.

However, rumors of being gay have long been associated with the Packers quarterback so his name is the first to come to mind after hearing Munn’s comments. Rodgers has gone on record in the past saying the rumors are untrue, but his attempts to dispel them have been so cringe-inducing and awkward they haven’t been tremendously convincing.

Listen to the entire discussion between Munn and Cummings below.