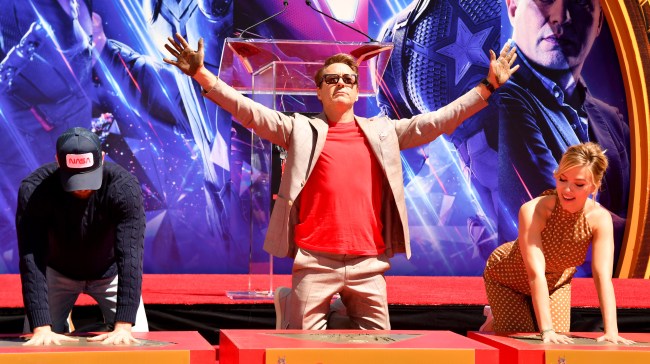 As you can see from the recent photo above from the TCL Chinese Theatre in Hollywood, the party never ends when you’re Robert Downey Jr. these days.

And speaking of parties, it would seem that Chris Pratt sharing an incredible, “really illegal” behind-the-scenes video from the Avengers: Endgame set the other day has opened up the social media floodgates for other Marvel actors to share some of their “illegal” videos and pictures from the set, one of which involves a little bit of a lunch party.

Of course, the “lunch party” pic comes from, who else, Robert Downey Jr. who posted a photo to Instagram of a “Women of Marvel Studios” lunch that he says he hosted during the filming of Endgame.

For those scoring at home, and if you are, congrats, that would be the very lucky Downey having lunch with Brie Larson, Zoe Saldana, Pom Klementieff, Gwyneth Paltrow, Evangeline Lily, Danai Gurira, Elizabeth Olsen, Karen Gillan and Letitia Wright. (Was Scarlett busy?)

Paltrow commented on the photo, “Why is my face so red?”

Perhaps because of Pratt and Downey’s posts, Elizbeth Olsen and Zoe Saldana are now also getting in on the Avengers: Endgame behind-the-scenes fun on social media.

Olsen, much like Pratt, released her own behind-the-scenes video that takes another peek at the scene Pratt filmed. In her video, Chris Evans is still hamming it up for the camera, only this time’s he’s joined in being silly by Chris Hemsworth and Don Cheadle.

Couldn’t be more proud to be apart of @marvelstudios ! The last five years have been the greatest journey. So proud of #avengersendgame ! Thank you everyone for the support !

Saldana’s videos are slightly different, but no less interesting. Especially to fans who took the clip of her applying green lipstick and turned it into a meme.

This movie is just going to be the gift that keeps on giving for quite some time.