Operation Odessa: Insane True Story Of How A Russian Mobster, Miami Playboy And Cuban Spy Tried To Buy A Soviet Submarine For The Cali Cartel 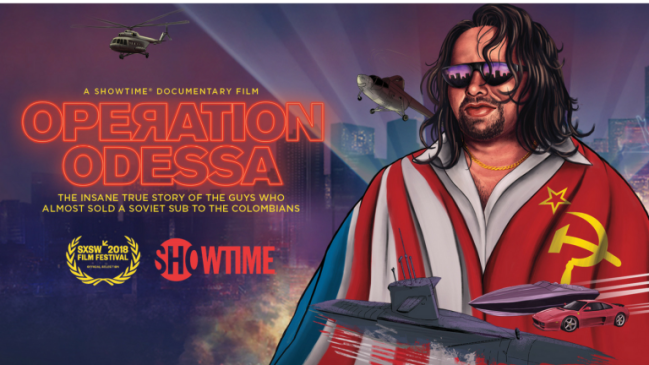 True crime is an extremely popular genre at the moment, which explains why Netflix users are going crazy over the Operation Odessa documentary. The revealing, sometimes seemingly preposterous crime doc shows how a small group of misfit criminals who were able to con the Soviet government, Cali cartel, and the DEA.

We take you to South Florida in the late 80s and 90s, where the lawless trifecta attempted to get into the drug game in a major way, but things quickly got out-of-hand after they devised a completely insane and ridiculously dangerous scheme to sell a Soviet military submarine to the powerful Cali Cartel.

“So for these three individuals, one with the Israeli passport, one was, I believe, a Cuban, and a Venezuelan passport,” said U.S. federal agent Alex Yasievich.

The criminal gang was made up of a large goateed Russian man nicknamed “Tarzan,” real name Ludwig Fainberg. The Russian gangster immigrated to Brighton Beach in Brooklyn, where he became an enforcer for New York’s Gambino crime family. He moved to Miami, where he owned a strip club named Porky’s, based on the 1981 sex-comedy movie of the same name.

Tarzan was friends with exotic car dealer and Miami playboy Juan Almeida, and they were introduced to each other by Vanilla Ice at the celebrity hot spot of Fort Apache Marina. “I just really want to be his friend,” Tarzan said of Juan, who both shared a love of beautiful women and cocaine. “It’s no secret that cocaine is cool,” Juan proclaimed.

They teamed up with Cuban-born Nelson “Tony” Yester, who was a high-up member in Pablo Escobar’s Medellín cartel. Tony was once caught with 41 passports while trafficking cocaine on a plane, and was featured on a 1999 episode of America’s Most Wanted, and to this day he is an international fugitive. The Operation Odessa documentary, from director Tiller Russell, claims that Tony made a million dollars in his first year of selling cocaine.

Yester gave an exclusive interview to Russell in an airport hangar in an undisclosed location. Yester arrived in the U.S. in May 1980, “As soon I saw that place Key West, out of that boat, I say, ‘This is paradise.'”

“He was the brain of the operations,” Tarzan said of Tony. “Very connected worldwide,” Juan said of Yester, adding that he can be “extremely dangerous.”

The movie’s title “Operation Odessa” was named after the government’s task force mission to catch Russian gangsters who collaborated with Latin American drug lords. The DEA and FBI had reportedly compiled 15,000 hours of wiretaps on the criminals.

The trio successfully purchased two large Russian military Kamov helicopters from the Soviets for $650,000 each, and then re-sold them to Colombian cartel kingpins so they could traffic massive amounts of drugs. But to escape St. Petersburg with the copters, Almeida had to pose as Pablo Escobar to impress the Russian mob.

The sale of the helicopters made the trio legends in Colombia, and then the were tasked with getting a submarine for the cartels.

“I had a friend of mine living in St. Petersburg, and I said, ‘Misha, tell me something,'” Tarzan said. “‘I know it’s gonna be a strange question. Is this possible, to buy a military submarine – used one?'” And he said, ‘What a question! Let me check.'”

Tarzan continued, “He called me in two days and he asked me, do we want the submarine with missiles or without missiles?”

With the DEA following their every move, the group went to Moscow to buy a submarine for the Colombians.

“There was a point in time that no one knew who was in charge,” Almeida recalled. “And I distinctly remember arriving in Moscow, I remember going to Moscow Oh my god, everything is for sale? I mean everything? It was a complete free-for-all.”

“They just walked into the base – and not only walked in the base, were given a tour of the base,” Yasevich said. “This is drug traffickers, criminals getting access to a submarine base to look and see and shop for a boat in the Russian base. That’s just unheard of.”

The movie climaxes with the criminal crew attempting to purchase a $35-million military submarine in Russia. The negotiations included a naked sauna session and several bottles of vodka with Russian military officials.

The movie features flashy montages of Miami Vice-like sequences of cigarette boat races as Scorpions’ 1990 smash hit Winds of Change blares as the soundtrack, and boasts a story that’s more insane than that of Scarface.