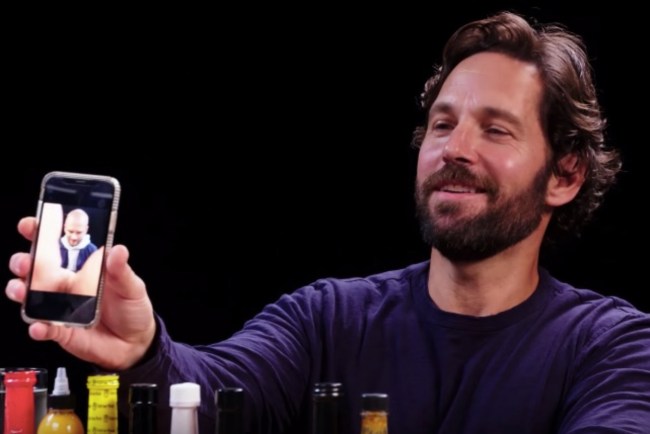 Paul Rudd was the latest guest on Hot Ones and like all of those who came before him he was absolutely dominated by Da Bomb hot sauce and left questioning every decision in life that led him to this point.

It is hard to imagine an nicer human being in the acting business than Paul Rudd but given his Midwest upbringing I’m sure you could run through a list of actors born in the Midwest and check off boxes like ‘yup, that’s the nicest damn man alive.’

But I digress. We’re here to talk about Paul Rudd getting absolutely dominated by Sean Evans and Da Bomb Hot Sauce on the latest episode of Hot Ones. Usually, from a viewer perspective, these interviews all about watching these actors, musicians, and athletes meltdown from the heat while Sean relentlessly pelts them with questions but this time is different.

There’s a moment about halfway through this episode, around the 16min mark, where Sean asks about a random fact he’d learned about Paul Rudd’s ability to take weird photos of celebrities. It’s pretty brilliant.

Paul is able to use the crease of his hand while taking an iPhone picture to make it look like there’s a naked person standing in the foreground of an otherwise normal photograph.

I suggest watching the full episode because it’s better than most but at the very least you should skip ahead to around the 16:20 mark where Paul shows off his cellphone trick and then you can try it for yourself.

I recently ordered a bottle of Da Bomb Hot Sauce and it’s been sitting in my pantry for a few weeks now. I had myself all hyped up to try it out but then the plans to try it with a friend fell through and I’ve just been putting it off ever since because I have these visuals of Hot Ones guests crying with pain from this sauce. But maybe this is my weekend, the time I finally sack up and give it a try.

Want more Hot Ones? Check out the Shia LaBeouf episode where he discusses wrestling with Tom Hardy (naked?!) or Stone Cold Steve Austin barely surviving and accusing Sean of lacing the wings with something.