Steve Austin Almost Didn’t Survive The ‘Hot Ones’ Challenge: ‘These Aren’t Laced With Amphetimines Are They?’ 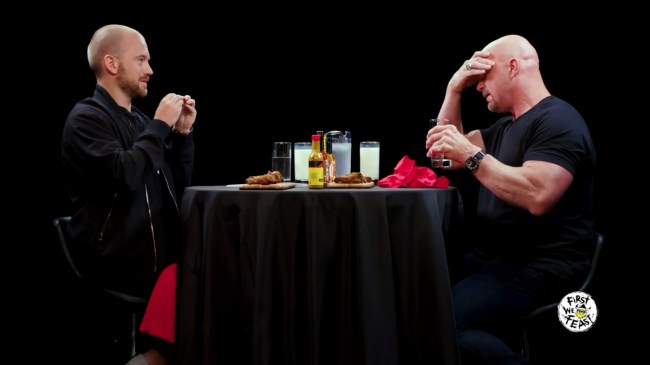 To close out season nine of First We Feast’s “Hot Ones’ Challenge webseries, they invited none other than WWE Hall of Famer Stone Cold Steve Austin to join the show.

“Back in the day I was the toughest SOB in the WWE. Here in front of you, I might be the biggest sissy you’ve ever had on the show,” Austin said at the beginning of the episode.

As the show progressed, host Sean Evans asked Austin about numerous myths and legends surrounding him. Some of what we ended up learning is that Austin confirmed myths that over 100 beer were consumed at a show in Japan, that he once shit his pants in a match with Yokozuna, and that the brawl between he and Booker T performed on TV inside a grocery store caused $10,000 in damages.

After a particular spicy wing, Austin paused for a few moments like he was getting ready to say something important, but instead he admitted, “I was actually timing my heartbeat. I’m thinking, ‘Something’s about to go wrong here.’ My heartbeat hits about 150, something’s wrong. These aren’t laced with amphetimines are they?”

Of course, no episode of, well, anything involving Stone Cold Steve Austin would be complete with a throwing back a Stevewesier or two.

All in all, Austin held up pretty well, and, as usual, shared some A+ wrestling anecdotes, plus his number one driving pet peeve, along the way. Check it out…