Paulina Gretzky Shows Off Her Full Size Pink Barbie Jeep, With A Bikini To Match 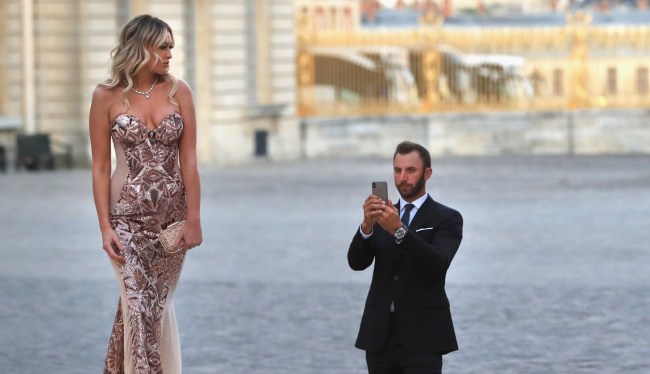 Paulina Gretzky lives in a whole different world than most people.

Her dad Wayne is the greatest hockey player to ever lace up skates. Her mom Janet appeared as an actress in movies like The Beastmaster, The Flamingo Kid, American Anthem, A League of Their Own, and, of course, Police Academy 5: Assignment Miami Beach.

She’s married to and has two kids with former world number one ranked golfer Dustin Johnson who signed to play for LIV Golf this past summer for “around” $125 million.

It would be hard for the average person to have any kind of idea what Paulina Gretzky’s life is like. Just take her recent 34th birthday party, for example. It was like nothing most people will ever experience.

Now, on top of all of that, Paulina just shared a couple of photos on Instagram showing off her full-size pink Barbie Jeep golf cart.

This thing looks nicer than most folks’ actual cars do.

Naturally, being Paulina Gretzky, she showed off her pink Barbie Jeep golf cart while wearing a tiny bikini surrounded by palm trees.

“Just chicks,” she captioned the Instagram post which also feature a couple of ducklings waddling around in the back seat. (Yes, her golf cart has back seats.)

Putting aside the fact that the birds in her backseat are, in fact, ducklings and not actually chicks (which, of course, people pointed out in the comments), it’s still a photo that caused much envy.

“Early post of the year candidate,” another fan commented.

“Omg. The Barbie car is better than I could have dreamed,” someone else gushed.

Paulina Gretzky appears to have recovered quite well from the New Year’s Eve party she documented on her Instagram stories Saturday night.

What a life this woman leads, huh?