People Used The Pandemic As An Excuse To Do More Meth 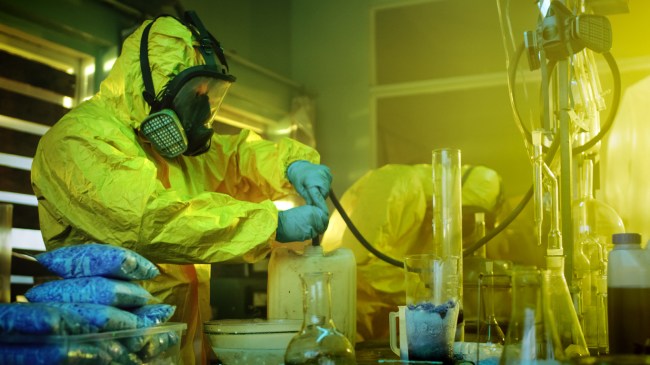 While parts of the nation were busy hoarding toilet paper at the start of the pandemic, others made sure they had plenty of aluminum foil on hand. No, not because their masterplan for surviving the 2020 apocalypse consisted of living on a steady stream of baked potatoes and grilled vegetable pouches. It was so they could smoke more meth – a lot more. That’s right, Toto, we’re not in West Virginia anymore. Contrary to popular opinion, meth is no longer just for hillbillies, Nazis, and failed musicians still rocking an unruly mullet. The entire United States population has caught on to the bug-eyed powers of crank, and they’ve spent the better part of the past year getting more acquainted with it, a new study finds. Welcome to the Land of The Tweaked!

A report from the laboratory Millennium Health finds that methamphetamine has been blasting off all across the U.S. at a high rate of speed – all the puns intended. And this filthy scourge spiraled out of control as soon as the population realized that this pesky little virus that’s still grudge-humping the nation could signal the end. Research based on urine samples shows a 20 percent increase in U.S. meth consumption right before President Trump officially put the nation into lockdown mode.

“As we focus on what happens with the COVID-19 pandemic in both the long and short-term, it is critically important for us to not lose sight of the epidemic of drug-related overdoses that continues to coexist,” said Kevin L. Zacharoff, MD, FACIP, FACPE, FAAP, Faculty and Clinical Instructor SUNY Stony Brook School of Medicine, Stony Brook, New York.

Some states saw more anhydrous-based debauchery than others. Nevada experienced the greatest influx in those headed for toothlessness and a very unflattering mug shot. The state had a 195 percent uptick in meth use from March until May. This surge is likely due to mandatory lockdowns making it impossible for residents to engage in legal activities like gambling and prostitution. Perhaps they thought being on speed would help expedite the reopening process.

Other states also enthusiastically got on board with the geeker philosophy. Mississippi saw an impressive 82 percent increase in statewide meth consumption during the pandemic, which is really surprising since we thought they were already at 100 percent. Hey, you learn something every day.

It wasn’t just meth that a bored, frightened nation was getting into to weather its way through the supposed end of times. Despite knowing just how brutally lethal fentanyl can be, the population took it upon itself to try more of that too. But some states weren’t farting around when it came to how much they were willing to push the envelope with this drug. Iowa experienced a 561 percent increase in fentanyl-positive urine samples, while places like New York and Mississippi saw upticks of 230 and 270 percent, respectively. Uh-oh, look at Mississippi going all Requiem For A Dream. Perhaps a suitable replacement design for its flag, now that it has retired the Confederate battle emblem, should be the number to a drug treatment center.

All in all, it certainly wasn’t just COVID testing swabs that were going up people’s noses during the pandemic. Drug use, as a whole, increased nationwide, and cocaine and heroin played a considerable part. This is not surprising, though, especially considering that this rotten virus cost millions of people their jobs. To that end, many businesses, some of which had been operating for decades, were also forced to shut down or close permanently due to an inability to pay the bills. Hell, even larger restaurant chains and retail outlets have thrown in the towel in recent months and declared COVID the winner. The economic toll of this virus alone is enough to spark a savage drug habit in sober influencers, so what chance do the rest of us really have? The fact that the struggle has lingered on for so long for so many, it’s amazing that more of us are not sitting around in a circle someplace talking about our feelings. Who knows, we just might be if we could afford it. “Hi, my name is Mike (Hi Mike), and I haven’t been sober for the past six months.”