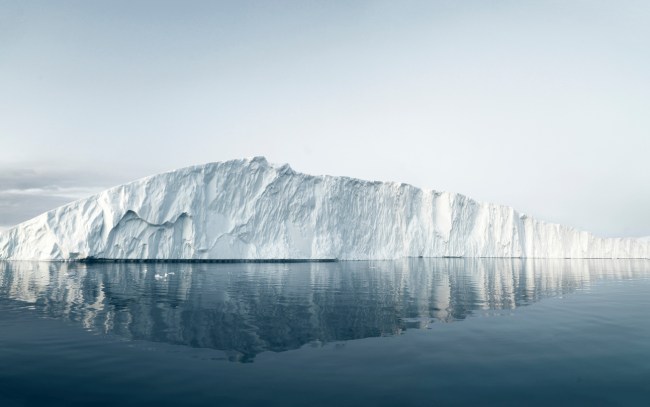 From yesterday's #IceBridge flight: A tabular iceberg can be seen on the right, floating among sea ice just off of the Larsen C ice shelf. The iceberg's sharp angles and flat surface indicate that it probably recently calved from the ice shelf. pic.twitter.com/XhgTrf642Z

Wow, it’s been amazing to see what a splash our photo of a tabular Antarctic iceberg, by #IceBridge’s Jeremy Harbeck, has made. Fly toward the berg with @NASAArmstrong's DC-8 forward camera. More: https://t.co/kADuUL455F pic.twitter.com/tm4Rydh8V3

NASA has discovered a visually-jarring mile-long iceberg that takes the shape of a perfect rectangle.

The iceberg was photographed floating near the Larsen C ice shelf in Antarctica by sea ice specialist Alek Petty. According to Petty, the formation is called a “tabular iceberg” and is not totally uncommon.

“The ice shelves that produce the icebergs are extremely flat and expansive, so we often see nearby tabular icebergs similar to the one seen in the photo,” Brooke Medley, NASA’s Operation IceBridge deputy project scientist, added over email to Mashable.

In July 2017, Antarctica’s Larsen C ice shelf released the enormous A68 iceberg, which weighs about 1,000 billion tons and occupies an area roughly the size of the state of Delaware. Harbeck and his colleagues were investigating this massive structure when the geometric shape was spotted.

Despite these bad boys being a relatively common thing to ice scientists around the world, the general public is preparing for an alien invasion.

I’m pretty sure it’s not natural although… pic.twitter.com/XChSOqxgwD

Not sure about that pic.twitter.com/yB62RkZJyJ

Now excuse me while I lock myself in my alien bunker.